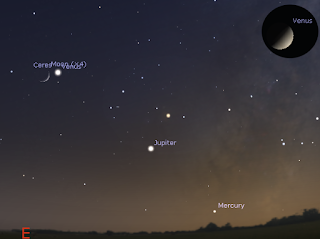 This month Saturn is lost from the evening sky for the first half of the month, it then meets  Mercury late in the month. Jupiter climbs higher in the morning sky, catching up with Venus.

Mercury  is visible in the low in the morning sky this month, meeting Saturn on the 15th.

Jupiter is close to Venus on the 23rd.

Mars is close to the waxing Moon on the 13th.

Saturn returns to the morning sky late in the month and is close to Mercury on the 15th.