The Last Quarter Moon is Saturday, November 11.  Mercury climbs higher in the evening twilight and meets Antares on the 13th. Saturn is visible in the low in the early evening sky.  Venus is now very low in  the morning twilight and is close to Jupiter on the 13th. Mars is close to the Moon on the 15th, a series of bright ISS passes starts on the 9th. Leonid meteor shower peaks next week. 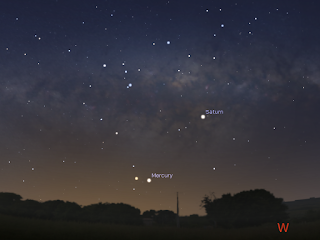 Evening sky on Monday November 13 looking north-west as seen from Adelaide at 20:45 ACDST  (45 minutes after sunset). Mercury is low above the horizon close to the star Antares with Saturn above.

Mercury is visible in early evening and is above the western horizon in the late twilight. Mercury is becoming more prominent, and is well worth watching as it rises into the evening sky up the body of the Scorpion. This week it comes close to the bright star Antares in the body of the scorpion on the 13th. This is the second of an interesting series of encounters over the coming weeks. Mercury is visible well after civil twilight, but you need a claer level hoizon to see it at its best.

Saturn is visible in the early evening setting around 10:30 pm local time. Saturn is no longer a viable telescopic target, being too close to the horizon when the sky is full dark. Saturn continues to sink into the western evening skies as the week progresses.

The constellation of Scorpio is still a good guide to locating Saturn. The distinctive curl of Scorpio is setting but still projects above the north-western horizon, locate the bright red star, Antares, and the look to the left of  that and above, the next bright object is Saturn. 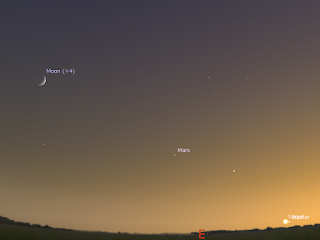 Morning sky on  Monday November 13 looking east as seen from Adelaide at 5:36 ACDST (30 minutes before sunrise). Venus is bright just above the horizon and forms a line with Mars and the Moon. Jupiter is very close to Venus.

Venus  continues to lower in the morning sky. This week Venus is close to Jupiter and forms a line with  Mars and the crescent Moon. It is becoming much harder to see Venus in the twilight, and you will need a clear unobstructed horizon to see the Venus low in the twilight.


Jupiter enters the morning twilight and is close to Venus on the 13th. You will need a clear, level unobstructed horizon, like the ocean or desert, to see the, and you will need binoculars to pick up Jupiter. .

Mars is climbing higher the twilight, and is now reasonably visible in the twilight. It is visited by the crescent Moon on the 15th. 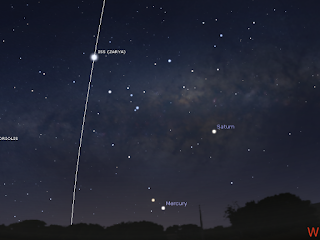 Evening sky on Sunday November 12 looking north-west as seen from Adelaide at 20:54 ACDST . Mercury is low above the horizon close to the star Anatres with Saturn above. The International Space Station passes next to them.


This week  there are a series of bright evening passes of the International Space Station. Some are low to the horizon others pass close to bright stars. When and what you will see is VERY location dependent, so you need to use either Heavens Above or CalSky to get site specific predictions for your location.