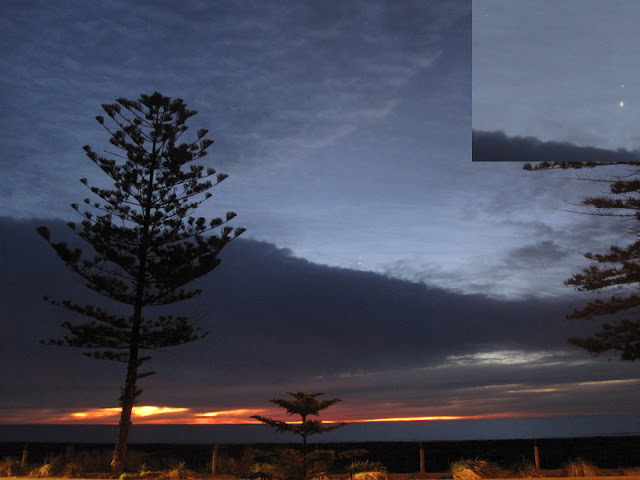 Last night clouded out the narrowing gap between Venus and Jupiter (which was lucky, as my kid taxi duties stopped me seeing it anyway) but today dawned sunny and clear but for a few wisps of cloud. It stayed that way for most of the day, so I organised with some friends we would meet on the esplanade above the beach and I would bring the telescope.

So of course it clouded over just after we made the arrangements. I took the scope up anyway, on the off chance there was a break in the cloud, and we stood around waiting while the kids circled us on their scooters.

And there was a break, or rather a thinning and for about 10 minutes of so we could see the pair together above an ominous cloud bank. I had the scope set up and was able to show the kids Venus and Jupiter together in the 114 mm Newtonian with 20 mm eyepiece, sky was too bright and cloudy to see Jupiter's Moons though. I got a few shots off and was even able to see Mercury in the zoomed images (not visible to the unaided eye).

Then the ominous cloud bank completely swallowed the planets, much to everyone's dismay. By the time I had slewed the scope to Saturn to assuage the sadness, the cloud bank covered it (and Mars) too. 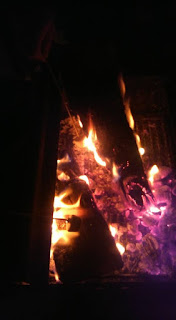 So we retreated to the fire my mate had built and chatted in its warmth while waiting for the clouds to break again. They didn't but we ate hot-dogs and toasted marshmallows and then went inside our friends house to watch Minions and chat. Pretty good way to end an expedition Ithink.

With any luck tomorrow, When Jupiter and Venus are closest, will be clear.