The Sky This Week - Thursday August 25 to Thursday September 1

The Last Quarter Moon is Thursday August 25. The New Moon is Thursday September 1. Venus and Jupiter are spectacularly close on the 27th and 28th. Mars and Saturn are visible all evening long. Mars is almost directly between the red star Antares and Saturn on the 25th. In the morning skies on the 26th the waning Moon is close to the bright star Aldebaran. 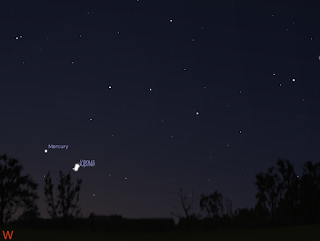 Evening sky on Sunday August 28 looking west at 60 minutes after sunset. Jupiter is spectacularly close to Venus with Mercury nearby.  Similar views will be seen throughout Australia at the equivalent local time. (click to embiggen).

Jupiter is in the western evening sky as the sun sets, and is  too close to the horizon for decent telescopic observation. Jupiter's Moons will be an still be excellent sight in binoculars for a short while before it sets.

Venus continues to rise above the twilight glow this week. Venus and fleet Mercury are sufficiently high in the dusk sky to be seen easily. From a little after half an hour to an hour after sunset to a bit over an hour after sunset, Venus, Mercury, Jupiter make a nice triangle the dusk sky. If you extend a line from the apex up it meets  Mars, Anatres and Saturn.

Mercury continues to return to the horizon.

Jupiter, Mercury and Venus form a triangle in the dusk, with Jupiter coming closer and closer to Venus during the week, becoming very close on the 27th and spectacularly close the 28th. A detailed guide to this rare event (the next one will be in 2065) is here.

After this Venus and Jupiter draw apart once more making a broad triangle with Mercury. 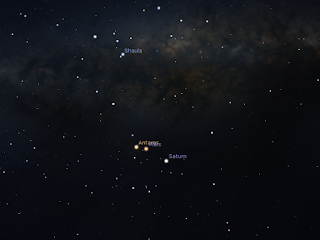 Evening sky on Thursday August 25 looking west as seen from Adelaide at 22:00 ACST. Mars, Saturn and Antares form a  straight line. Similar views will be seen elsewhere in Australia at the equivalent local time. (click to embiggen).

Mars is high in the western evening skies in the body of the Scorpion.

Mars moves further down the body of the Scorpion this week. Mars starts the week almost directly between Antares and Saturn. During the week. Mars moves away from Saturn and the red star Antares once more froming a triangle with them.

Mars was at opposition on May 22,  and is still visibly dimming, but is still a modest telescope object. It is visible all evening long. In even small telescopes Mars will be a visible disk, and youmay even be able to  see its markings.

Saturn was at opposition on the 3rd of June. However, Saturn's change in size and brightness is nowhere near as spectacular as Mars's, and Saturn will be a reasonable telescopic object for many weeks. Saturn is reasonably high in the evening sky and is readily visible below Scorpius. Saturn is still high enough for good telescopic observation in the evening. In even small telescopes its distinctive rings are obvious.