The Full Moon is Sunday January 24. Jupiter is visible in the late evening sky. The Moon is close to Jupiter on the 27th.  All five bright planets; Jupiter, Mars, Venus, Saturn and Mercury form a long line in the morning sky.  Saturn  is close to the red star Antares. Venus is close to the Trifid nebula from the 24th to the 26th.

The Full Moon is Sunday January 24. 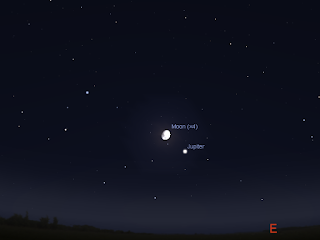 Evening sky on Wednesday January 27 looking east as seen from Adelaide at 23:55 ACDST. Jupiter is above the horizon shortly before midnight with the Moon close by. Similar views will be seen elsewhere in Australia at the equivalent local time. (click to embiggen). 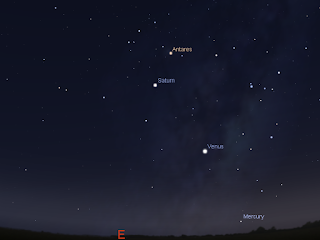 Early morning sky on Sunday January 24 looking east as seen from Adelaide at 5:23 ACDST showing Saturn with the red star Antares close by, Venus and Mercury.  Similar views will be seen elsewhere in Australia at the equivalent local time. (click to embiggen).

Mars is higher in the morning skies and is readily visible in the pre twilight dark. Mars comes closer to the bright star alpha2 Librae, Zubenelgenubi, during the week.

Venus is easy to see in the morning twilight. It is a  distinct "gibbous Moon" shape and is nice in a small telescope. Venus enters the lid of the teapot of Sagittaarius and is close to the Trifid and Lagoon nebulas and the open cluster M21 from the 24th to the 26th. It is closest on the 25th. It then heads for the bright globular cluster M22.

Mercury is appears low in the morning twilight. it will be hard to see until the end of the week.

This week all five of the bright planets are visible in the morning sky, the first time this has happened for 10 years. Saturn and the red star Antares are close. During the week Venus moves away Saturn and enters the lid of the teapot of Sagittarius coming close to many nebula and clusters. You will need binoculars to see this, and the brightness of Venus will make the clusters hard to see.

Comments:
Thanks for the info. I plan on heading outdoors before 5am on Sunday to observe the alignment of the 5 planets. Do you have any suggestions for a good place to observe this close to Adelaide? Unfortunately we have those pesky hills obscuring the Eastern horizon. Where do you go to observe?

Try north, around the Salt flats and up near Parafield, maybe even Parafield airport. It is a bit of a hike, but it does have nice flat horizons and not too many lights. While there are some parks and reserves along the coast they are typically locked up so you can't park.