The First Quarter Moon is Thursday November 19. Saturn is in the head of the Scorpion and is close to the star nu Scorpii. The Moon is close to Saturn on the 13th. In the morning Jupiter, Venus and Mars from a line in the morning sky. The Leonid meteor shower peaks on the morning of the 18th. 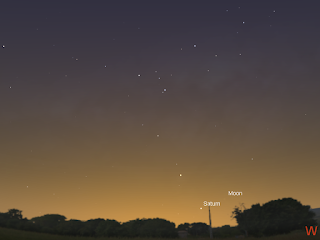 Evening sky on Sunday October 25 looking west as seen from Adelaide at 20:45 ACST.  Saturn is  visible  above the western horizon in the head of the Scorpion, close to the star nu Scorpii. Similar views will be seen elsewhere in Australia at the equivalent local time. (click to embiggen).

Saturn is  visible at twilight in the head of the constellation of the Scorpion not far from the bright red star Antares. The sight of the distinctive back to front "question mark" constellation of the Scorpion above the horizon, with bright Saturn in its head, is very nice indeed. However, this is the last week to see Saturn before it disappears into the twilight glow.

Saturn is close to  the double star nu Scorpii at the start of the week. It moves away from nu Scorpii as the week progresses. Saturn is joined by the crescent Moon on the 13th, but the pair will be difficult to see in the twilight without a clear, level horizon.  After this, Saturn is lost to view until December, when it appears in the morning sky. 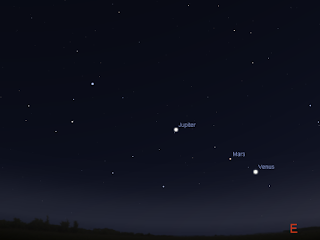 Early morning sky on Sunday November 15 looking east as seen from Adelaide at 5:00 ACDST showing Jupiter,  Mars, and Venus.  Similar views will be seen elsewhere in Australia at the equivalent local time. (click to embiggen).

Jupiter  rises higher in the morning skies and is now easy to see in the dark of early twilight.

Jupiter, Mars, Venus and the bright stars Regulus form a line in the sky this week. Venus starts the week close to Mars. 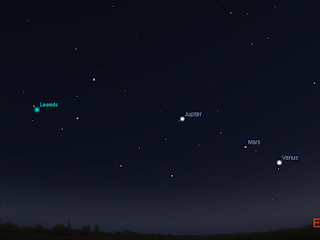 Morning sky looking north-east as seen from Adelaide at 5:00 am local daylight saving time on Wednesday November 18 showing Jupiter, Mars and Venus near Leo, with the Leonid Meteor shower radiant indicated with a starburst. Similar views will be seen elsewhere at the equivalent local time. Click to embiggen.

On the morning of Wednesday November 18 the Leonid Meteor shower peaks (from the point of view of Australians, that's 17 November UT), with the best time being between 3-4 am.

This is a  not a particularly good Leonid year. Very few meteors will be visible (maybe oneto two per hour). You can use the Meteor Flux Estimator to get a prediction for your location. Use the 13 Leonids option and don't forget to set the year to 2015.