The New Moon is Thursday July 16. Venus is brilliant in the twilight evening sky with bright Jupiter below it. On the 18th and 19th the crescent Moon is close to the pair.  On the 19th a daytime occultation of Venus is seen in north-eastern Australia. Saturn is in the head of the Scorpion and is easily visible in the evening. Mercury is lost to view. The crescent Moon is close to the red star Aldebaran on the 13th. 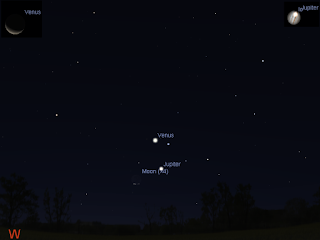 Early evening sky on Saturday July 18 looking north-west as seen from Adelaide at 18:30 ACST showing the Moon, Venus and  Jupiter close together. The inset shows the binocular view of the two at this time.

Venus and the bright star Regulus are close, with Jupiter below making a shallow triangle in the sky.  on the 18th and 19t the crescent Moon joins the trio. 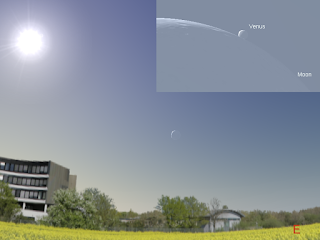 The Moon at 9:52 am AEST  in  Brisbane on Sunday June 19 just  as Venus appears from behind the Moon. Similar views will be seen at equivalent times elsewhere in north-eastern Australia.

On the 19th in daylight, Venus is occulted by the Moon as seen from north-eastern Australia. From Alice Spings Venus emerges from behind the Moon at 9:19 am ACST. This is very close to the horizon.

The Sun is nearby, so only experienced observers should attempt this observation, making sure the Sun is obscured behind something big. Be VERY careful not to accidently view the Su though you telescope of binoculars, sever eye damage or blindness may result. Venus will be the brightest object near the Moon, but will only be visible in binoculars or a small telescope. Start watching about half an hour before hand to get set up and familiar with the sky.

Jupiter is visible in the early evening, setting just before 8:00 pm. It is high enough for telescopic observation once twilight is over, and there is a narrow window of about 2 hours before it is too close to the horizon for telescopic viewing. Jupiter's Moons will be putting on a good display in both binoculars and small telescopes. 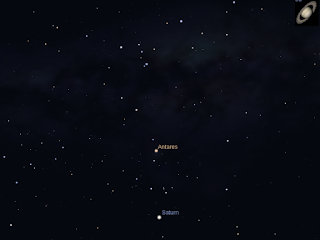 Evening sky on Saturday July 18 looking at the zenith while facing west as seen from Adelaide at 22:00 ACST.  Saturn is  easily visible high above the western horizon near the zenith near the head of the Scorpion. The inset shows the telescopic view of Saturn at this time. Similar views will be seen elsewhere in Australia at the equivalent local time. (click to embiggen).

While Saturn is  readily visible from the end of twilight, it is best for telescope observation from around 20:00 into the early morning hours. At 22:00 it is at it's highest above the northern horizon near the zenith (with Saturn facing west). This is also a good time to scan Scorpius and Sagittarius with binoculars to reveal the clusters in and around the Scorpions tail.