The First Quarter Moon is Wednesday June 24. Earth is at solstice on the 22nd. Venus is prominent in the twilight evening sky with bright Jupiter close by. The Crescent Moon visits the pair on June 20. Saturn is in the head of the Scorpion and is easily visible in the evening. Mercury comes close to the bright star Aldebaran.

The First Quarter Moon is Wednesday June 24. The Moon is at apogee, when it is furthest from the Earth, on the 24th. Earth is at solstice on the 22nd, when the daylight hours are shortest. 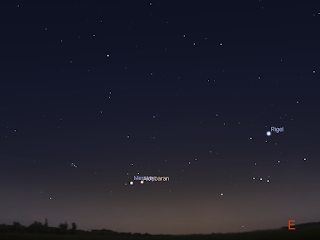 Early morning sky on Tuesday June 23 looking east as seen from Adelaide at 6:30 ACST showing Mercury in the Hyades, close to the bright star Aldebaran. The pair are just  above the horizon. Similar views will be seen elsewhere in Australia at the equivalent local time.  (click to embiggen).

Mercury climbs higher in  the morning skies this week, on the  23rd to 25th  it is close to the bright star Aldebaran, making an interesting pattern in the Hyades cluster. 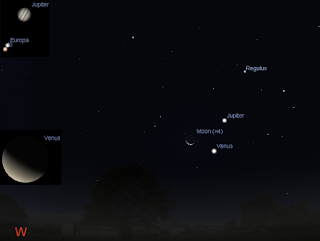 Early evening sky on Saturday June 20 looking north-west as seen from Adelaide at 18:30 ACST showing Venus,  Jupiter and the Moon.

Insets show the telescopic views of Venus and Jupiter at this time. Similar views will be seen elsewhere in Australia at the equivalent local time. (click to embiggen).

At the start of the week Venus, Jupiter and the star Regulus in Leo form a line. Venus draws closer to Jupiter during the week, heading for a a very close meeting at the end of the month.

Jupiter  is easily seen  in the early evening sky near Venus in the north-western sky as the night goes on. It is between the bright star Regulus in the sickle of Leo (this forms the head of the constellation of the  Lion) and Pollux in Cancer. It is also not far from the rather nice Beehive cluster in Cancer, and looks very good in binoculars. Jupiter and Venus are coming closer (see venus description above). 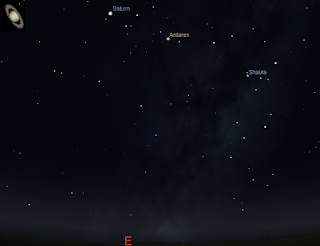 Evening sky on Saturday June 20 looking east as seen from Adelaide at 19:00 ACST.  Saturn is  easily visible above the horizon near the head of the Scorpion. The inset shows the telescopic view of Saturn at this time. Similar views will be seen elsewhere in Australia at the equivalent local time. (click to embiggen).