The Last Quarter Moon is Wednesday June 10. Venus is prominent in the twilight evening sky. Jupiter is the brightest object in the evening sky once Venus has set. Saturn is in the head of the Scorpion and is easily visible in the evening. Comet C/2015 G2 MASTER fades. Mercury enters the morning sky.

The Last Quarter Moon is Wednesday June 10. The Moon is at perigee (when it is closest to Earth) on the 10th. 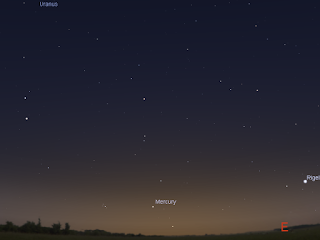 Early morning sky on Thursday June 11 looking east as seen from Adelaide at 6:30 ACST showing Mercury with the Hyades just peeking above the horizon. Similar views will be seen elsewhere in Australia at the equivalent local time.  (click to embiggen).

Mercury returns to the morning skies this week, but is only really visible late in the week. In the coming weeks Mercury will rise higher in the sky, and has some interesting encounters. 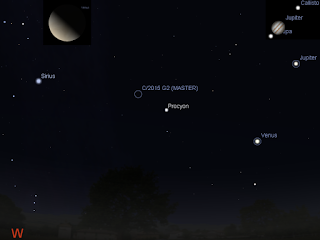 Early evening sky on Saturday June 6 looking north-west as seen from Adelaide at 18:30 ACST showing Venus,  Jupiter and comet C/2015 G2. The location of comet C/2015 G2 MASTER is shown with a circle. You will a telescope to see it now. Jupiter is the brightest object above the north-western horizon once Venus has set. Insets show the telescopic views of Venus and Jupiter at this time. Similar views will be seen elsewhere in Australia at the equivalent local time. (click to embiggen).

At the start of the week Venus forms a line with the stars Castor and Pollux, then draws away them, heading for a meeting with Jupiter later this month.

Jupiter is visible for most of the evening, sets just before 10 pm, and is high enough for telescopic observation once twilight is over. Jupiter's Moons will be putting on a good display in both binoculars and small telescopes.

Comet C/2015 G2 MASTER is climbing in the evening sky fading as it goes. It now magnitude 8,  and is only really visible in telescopes now. In modest telescopes the comet will be a fuzzy blob.

The comet will move through Canis Minor into Cancer this week. A spotters map suitable for printing in black and white is here. 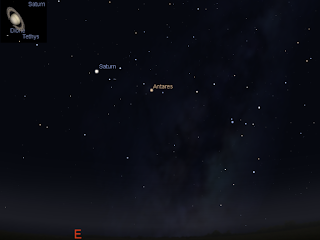 Evening sky on Saturday June 6 looking east as seen from Adelaide at 19:00 ACST.  Saturn is  easily visible above the horizon near the head of the Scorpion. The inset shows the telescopic view of Saturn at this time. Similar views will be seen elsewhere in Australia at the equivalent local time. (click to embiggen).

While Saturn is  readily visible from around  19:00, it is best for telescope observation from around 20:00 into the morning hours.