The Sky This Week - Thursday May 28 to Thursday June 4

The Full Moon is Wednesday June 4. Venus is prominent in the twilight evening sky. Jupiter is the brightest object in the evening sky once Venus has set. Saturn is in the head of the Scorpion and is easily visible in the evening. The Moon is close to Saturn on June 1. Comet C/2015 G2 MASTER is visible in binoculars in the evening.

The Full Moon is Wednesday June 4. 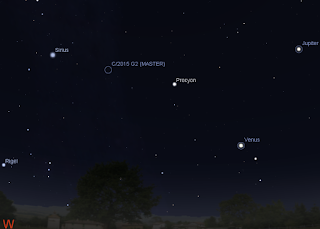 Early evening sky on Saturday May 30 looking north-west as seen from Adelaide at 18:30 ACST showing Venus,  Jupiter and comet C/2015 G2. The location of comet C/2015 G2 MASTER is shown with a circle. You will need binoculars to see it. Jupiter is the brightest object above the north-western horizon once Venus has set. (click to embiggen).

During the week Venus draws closer to the stars Castor and Pollux, forming a line with them, heading for a meeting with Jupiter later this month.

Jupiter is visible for most of the evening, sets just before 10 pm, and is high enough for telescopic observation once twilight is over. Jupiter's Moons will be putting on a good display in both binoculars and small telescopes.

Comet C/2015 G2 MASTER is climbing in the evening sky fading as it goes. It is below magnitude 6,  and with the full Moon nearby it is may be difficult to see with binoculars, but should be fine in telescopes. In binoculars and modest telescopes the comet will be a fuzzy blob.

The comet will move through Monocerous into Canis Minor this week. A spotters map suitable for printing in black and white is here. 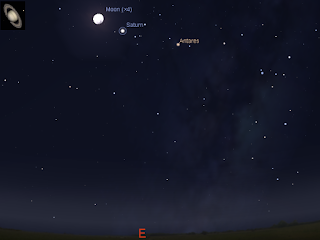 Evening sky on Monday June 1 looking east as seen from Adelaide at 20:00 ACST.  Saturn is  easily visible above the horizon in the head of the Scorpion. The Moon is close by on the 1st. The inset shows the telescopic view of Saturn at this time. (click to embiggen).

While Saturn is  readily visible from around  19:00, it is best for telescope observation from around 20:00 into the morning hours.

Comments:
Hi Ian,
Thank you for this helpful information. Just wondering as a fairly new observer, are there any differences when looking at the sky from the Darwin area. I'd like to be able to show the kids when the planets are visible if possible. Thank you, Kind regards, Angie Tester

It's pretty much the same, the southern constellations area bit lower, the northern a bit higher, and as you are closer to the equator the planets rise a bit higher in the sky, but they will be easily recognisable from the charts and maps. Especially when using the Moon as a guide post to the bight planets, the obvious bright object next to the Moon at the stated time will be the same Australia wide.