The New Moon is Wednesday June 17. Occultation of Uranus June 12. Venus is prominent in the twilight evening sky. Jupiter is the brightest object in the evening sky once Venus has set. Saturn is in the head of the Scorpion and is easily visible in the evening. Mercury is visited by the Moon in the morning sky. 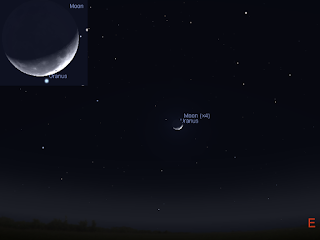 North-Eastern horizon as seen from Adelaide at 4:15 am ACST, just before Uranus is covered by the Moon.

On the morning of Friday 12 June Uranus is occulted by the Moon as seen from southern Australia (basically anywhere south of Townsville).

Southern Australia has the best views of ingress and egress. This is very much a binocular/telescope event, and only moderately sized telescopes or larger will show Uranus as more than a tiny dot, but it is interesting none the less.  More details, charts and timings for a variety of cities are here. 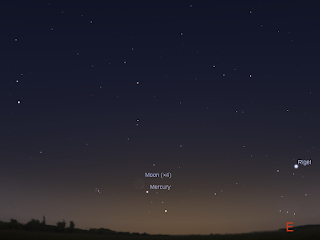 Early morning sky on Monday June 15 looking east as seen from Adelaide at 6:30 ACST showing Mercury near the thin crescent Moon with the Hyades just  above the horizon. Similar views will be seen elsewhere in Australia at the equivalent local time.  (click to embiggen).

Mercury climbs higher in  the morning skies this week, on the 15th it is close to the crescent Moon. In the coming weeks Mercury will rise higher in the sky, and has some interesting encounters with the Hyades and Aldebaran. 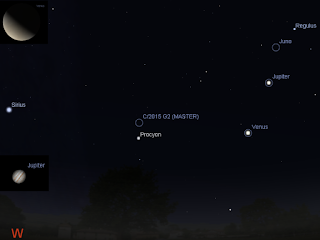 Early evening sky on Sunday June 14 looking north-west as seen from Adelaide at 18:30 ACST showing Venus,  Jupiter and comet C/2015 G2. The location of Comet C/2015 G2 MASTER is shown with a circle. You will a good telescope to see it now.

Venus is close to the Beehive  cluster on the 14th.

Jupiter is the brightest object above the north-western horizon once Venus has set. Insets show the telescopic views of Venus and Jupiter at this time. Similar views will be seen elsewhere in Australia at the equivalent local time. (click to embiggen).

At the start of the week Venus. Jupiter and the star Regulus in Leo forms a line. Venus draws closer to Jupiter during the week, heading for a a very close meeting at the end of the month.

On the 14th, Venus is within binocular distance of the faint but beautiful beehive cluster, it is actually on the outer edges of the cluster at this time, but Venus's brilliance may obscure most of the members of the cluster.

Jupiter is visible in the early evening, seting just after 9 pm, and is high enough for telescopic observation once twilight is over. Jupiter's Moons will be putting on a good display in both binoculars and small telescopes. 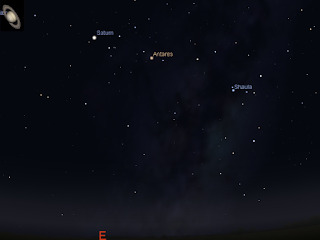 Evening sky on Saturday June 13 looking east as seen from Adelaide at 19:00 ACST.  Saturn is  easily visible above the horizon near the head of the Scorpion. The inset shows the telescopic view of Saturn at this time. Similar views will be seen elsewhere in Australia at the equivalent local time. (click to embiggen).

While Saturn is  readily visible from around  19:00, it is best for telescope observation from around 20:00 into the early morning hours.