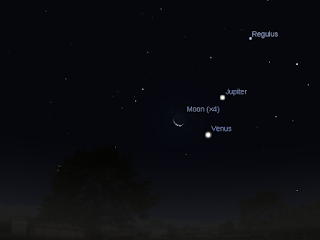 North-western evening sky at 6:30 pm as seen from Adelaide on June 20.

This month has some excellent planetary action  with Venus meeting Jupiter and the Moon late in the month.

Jupiter is in the early evening sky and although opposition has passed, it is still an excellent object this month as it comes closer to Venus for a close meeting late this month and early July .

Venus is readily visible in the evening sky coming closer to Jupiter.  Venus is close to the crescent Moon and Jupiter on the 20th and forms a triangle.

Saturn was at opposition last month. It is in the head of the constellation of Scorpius, the Scorpion and is an excellent telescopic object. Saturn is close to the waxing Moon on the 1st.

Mercury entes the morning sky, and has an interesting encounter with the crescent Moon on the 15th and Aldebaran on the 23rd and 24th.

Uranus is occulted by the Moon on the 12th.  This is a binocular and telescope only occultation. Occultation end be a bit difficult to see from Brisbane and Sydney.