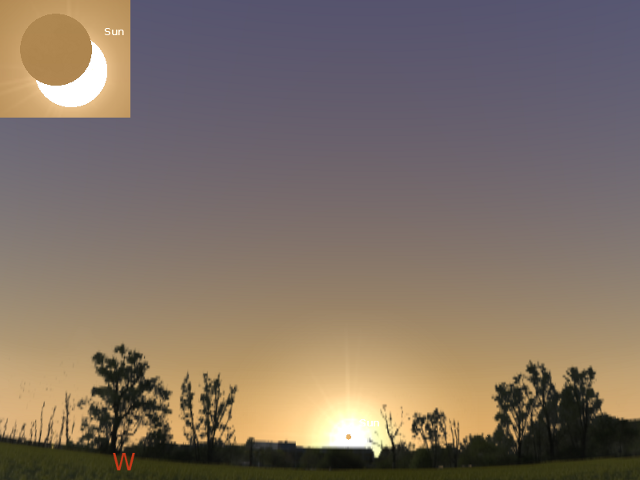 This is a final reminder that on the late afternoon of April 29, there will be a partial eclipse of the Sun, visible from almost all of Australia.

Unlike this month’s Total Lunar eclipse, a partial Solar Eclipse is never safe to look at, and you will need to use safe solar viewing techniques. 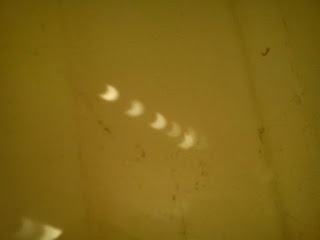 During the May 10, 2013 Partial Solar eclipse,  gaps between the vine leaves on my verandah acted as a pinhole camera and cast shadows of the eclipse on the wall. Click to embiggen.

While you may baulk at trying to see a partial Solar Eclipse late on a work day where you can’t drag equipment around with you, even a simple pinhole or leaf shadows will allow you to see the eclipse (more leaf images here).

The eclipse will be very low to the horizon, with maximum eclipse in some places like Brisbane and Sydney occurring as the Sun is setting.  Nonetheless, it is well worth trying to observe using safe solar viewing techniques (as noted above).

You will need some place with a low, clear horizon (some place high preferably) as the Sun will be low to the horizon (at maximum eclipse in Melbourne, the Sun will be a mere handspan from the horizon, in Adelaide 2 handspans and in Hobart a mere two fingerwidths). If you have a good view over the water, you will able to see the crescent Sun sinking below the waves. Even viewing the eclipse using pinhole projection in a towering high-rise will be interesting (and may impress your co-workers).

Of course, if you start looking earlier, you will see the early parts of the eclipse when the Sun is a bit higher. At maximum eclipse southern Australia will notice a definite chill and a slight but definite darkening as the Suns face is obscured.

Eclipse timings (eclipse start, maximum eclipse and eclipse end) for major cites (and links to times for other areas), more viewing guides and further safe solar observing instructions can be found at my eclipse site.

You can get predictions of cloud cover on the day from Skippy Sky.