The Last Quarter Moon is Thursday April 18. Jupiter is low in the early evening sky. The crescent Moon visits Jupiter on April 14 and 15. Saturn becomes more prominent in the late evening sky. Mercury is bright in the morning skies. Comet C/2012 F6 Lemmon returns to the morning skies near Mercury. 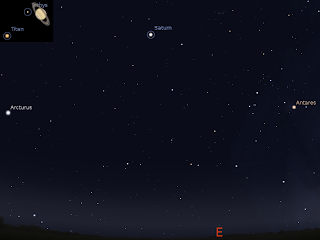 Sky on Saturday April 13 looking east as seen from Adelaide at 22:00 local time in South Australia. The inset shows a telescopic view of Saturn at this time. Similar views will be seen elsewhere at the equivalent local time (click to embiggen). 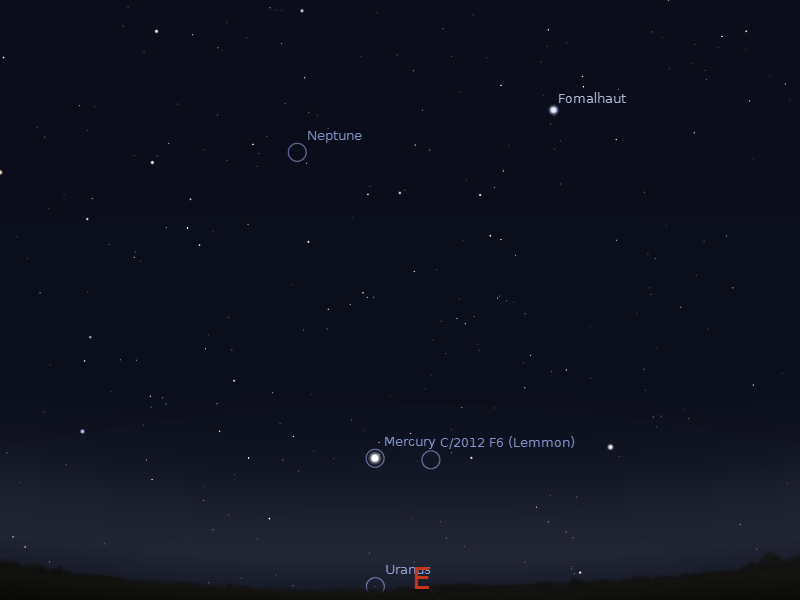 Morning sky on Sunday April 14 showing Mercury, looking east as seen from Adelaide at 5:30 am local time in South Australia. Similar views will be seen elsewhere at the equivalent local time (click to embiggen).

Mercury  is prominent in the morning skies this week, although it now sinks towards the horizon. It is easy to see as the brightest object above the eastern twilight sky an hour before dawn.


Comet C/2012 F6 Lemmon returns to the morning skies near Mercury. in the Morning twilight, at around magnitude 5, you will need binoculars to see it clearly. On the 14th the comet and Mercury are quite close. 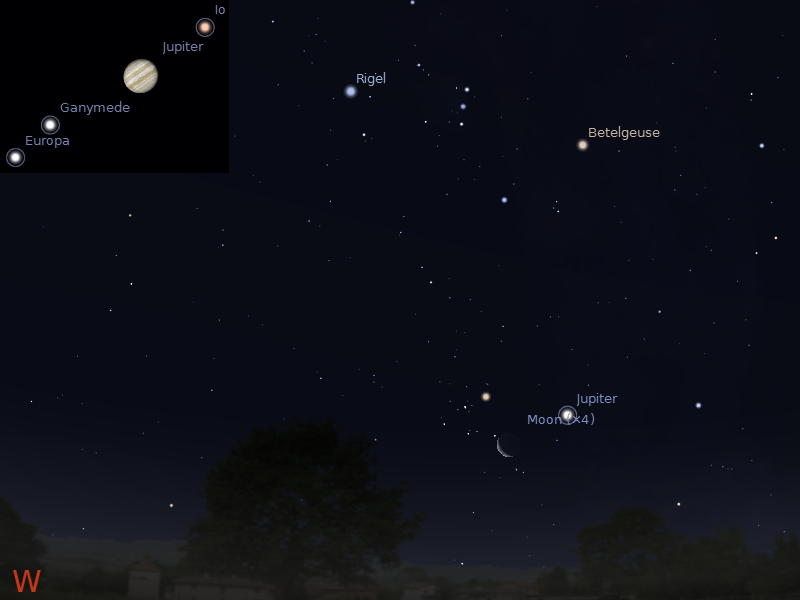 Evening sky looking west as seen from Adelaide at 19:00 pm local time on Sunday April 14. The crescent Moon forms a triangle with Jupiter and the red star Aldebaran. The inset shows Jupiter's Moons at this time. Similar views will be seen elsewhere at the equivalent local times indicated here.  Click to embiggen.

Jupiter is prominent low in the western early evening sky, being quite visible in the twilight.  Jupiter is below the Hyades, near the red star Aldebaran and is visited by the crescent Moon on the 14th and 15th.

Jupiter is setting progressively earlier, by 8:30 pm local time, so the giant world is harder to see in a telescope. Jupiters' Moons are easily seen in binoculars, and can be followed from night to night changing position, but with a narrow window between twilight and Jupiter setting, you won't have time to see much action..

There are lots of interesting things in the sky to view with a telescope. If you don't have a telescope, now is a good time to visit one of your local astronomical societies open nights or the local planetariums. Especially during the school holidays.