Update on Comet PanSTARRS in STEREO 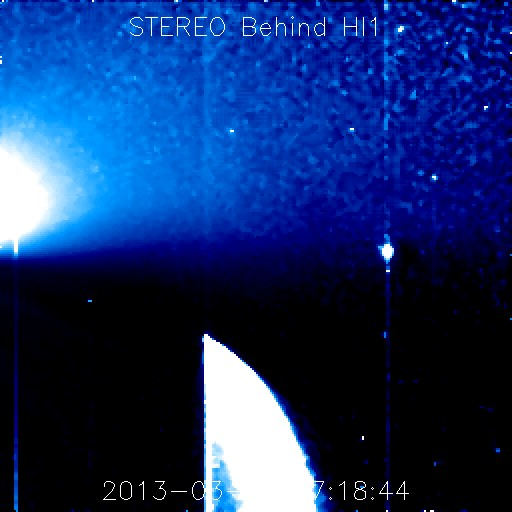 Still waiting to download the high resolution images, but this expanded set of beacon images you can distinguish between the image artefact spike and the dust tail (the spike is the straightish line, the broad fan of the dust tail sweeps off to the right, compare to yesterdays set).

Here's another animated GIF.  There is a better one at the STEREO site.

Comments:
The hi-res images have been published and widely discussed on Monday already: http://skyweek.wordpress.com/2013/03/09/allgemeines-live-blog-ab-dem-9-marz-2013

No, only a processed image has been released, we are still waiting for the HiRes images to become available in the STEREO archives (juts checked again, only the 9th is there).

Karl may have access to them, but not me :-)

Carnival of Space #292 is Here!
The Sky This Week - Thursday March 14 to Thursday ...
And Hello Comet PanSTARRS (In STEREO)
Farewell Comet PanSTARRS (From Southern Skies)
Hot Bats
At Womadelaide, not much chance of comets
At symphony orchestra
Comet C/2011 L4 PanSTARRS (Tuesday 5 March, 2013)
Asteroid 2014 AZ5 Will Not Hit Earth (Because it D...
Reader Pictures - Comet PanSTARRS