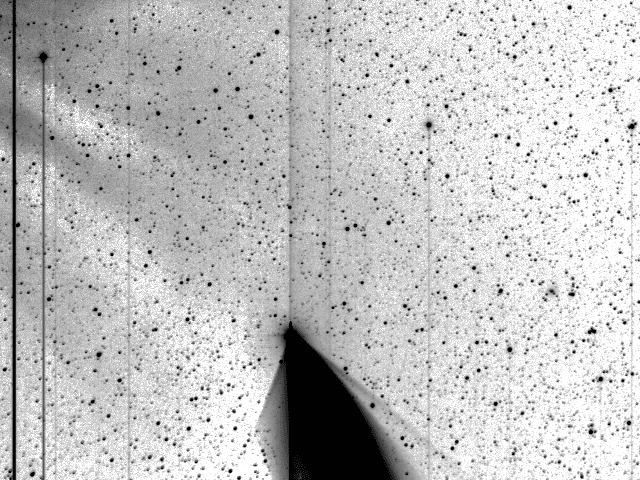 Comet C/2011 L4 PanSTARRS from 20:49 UT on 10 March, high resolution images from the STEREO Behind H1 imager. The image has been inverted to make the faint tails clearer.  Image stretched in FITS liberator after background subtraction in ImageJ. Click to embiggen.

Finally downloaded the high resolution images. (Yes Daniel, I know Karl Battams did it better earlier).  In this image you can see the complex tails of the comet. (Compare to the beacon images here and here, although Messier hunter did a good job cleaning them up here).

There are at least thee tails visible (see here for a more detailed processed image from the STEREO group that shows the tails more clearly).

There has been a lot of discussion on the STEREOHUNTERS group of what the tails consist of, the thin far right-hand tail that is pointing directly at the Sun might be something like iron (Fe) ions blasted off the surface of the comet, something similar was seen with comet McNaught. It may also be CO+ or H2O+ (or perhaps a combination). It's unlikely to be sodium ions due to the wavelength sensitivity of the H1 behind imager.

The dark, broad conical fan is the dust tail, and the shorter tail on the left with the fainter fan connecting to the broad fan may be large dust particles.

Update on Comet PanSTARRS in STEREO
Carnival of Space #292 is Here!
The Sky This Week - Thursday March 14 to Thursday ...
And Hello Comet PanSTARRS (In STEREO)
Farewell Comet PanSTARRS (From Southern Skies)
Hot Bats
At Womadelaide, not much chance of comets
At symphony orchestra
Comet C/2011 L4 PanSTARRS (Tuesday 5 March, 2013)
Asteroid 2014 AZ5 Will Not Hit Earth (Because it D...