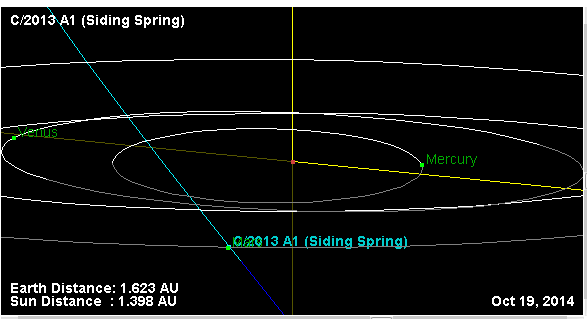 Image of the JPL Orbit widget which shows Mars and comet C/2013 A1 on top of each other on October 19, 2014, but note the caveat in the applet that says "The applet was implemented using 2-body methods, and hence should not be used for determining accurate long-term trajectories (over several years or decades) or planetary encounter circumstance"

A reader pointed out that the JPL Orbit Diagram for comet C/2013 A1 (Siding Spring) shows the Comet and Mars on top of each other on October 19, 2014 (see the diagram here). Does this indicate an impact between the comet and Mars?

No, if you go to the bottom of the orbit diagram and click on the [show close approach] link, you will see that the nominal close approach is 0.006 AU (compare this to the 0.00023 AU close approach of 2012 DA14, which misses us by two Earth diameters). 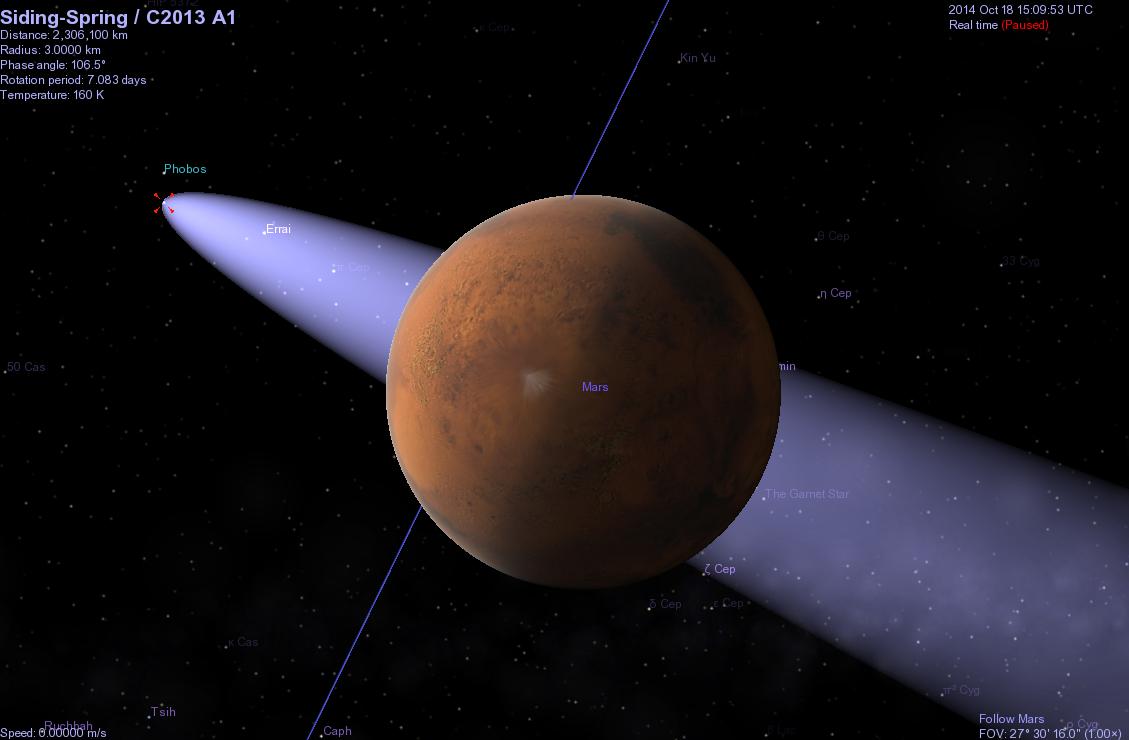 The error associated with this estimate includes an impact though (and a maximum miss of 0.24 AU), so an impact can't be ruled out at this stage.

However, as further observations are added and the orbit is refined, we will have a better idea of whether it will impact. The latest Minor Planet Ephemeris data suggests that an impact is unlikely, with a nominal pass of 0.015 AU (2,277,700 Km from Mars's surface). 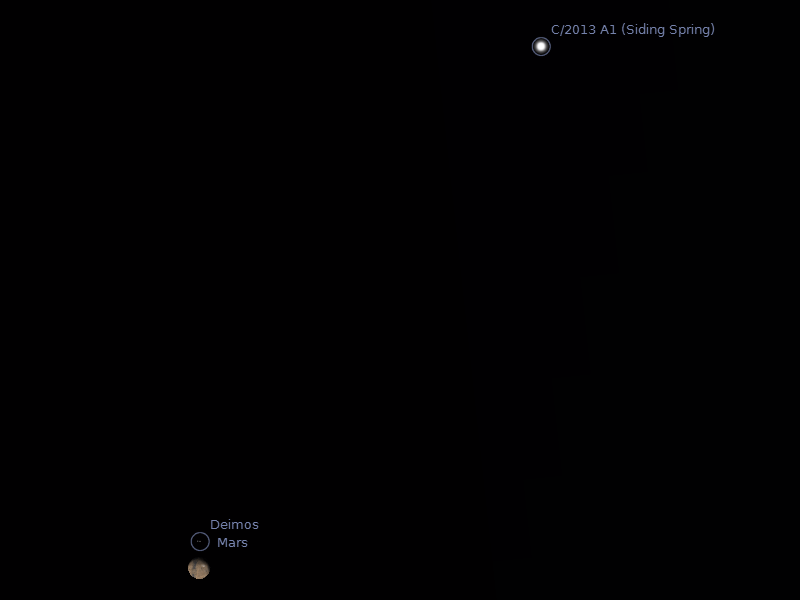 Simulation of the telescopic view of Mars and C/2012 A1 on October 19 as seen from Adelaide near closest approach..

Importing the latest elements into SkyMap or Stellarium suggests that from Earth we will see the comet and Mars less than 2 minutes of arc from each other, which will look quite nice in telescope eye pieces (but hard to image as the comet will be a dim magnitude 8.5 and Mars bright).

Sorry, I read your blog. This is quite scary. Could this knock mars out of orbit or something crazy?

No, it can not knock Mars out of orbit; we will be perfectly safe. The Mars rovers, on the other hand, could potentially be in trouble :)

In the unlikely event that this does hit mars I have seen estimations of 2x10^10MT of energy could be released. What sort of damage *could* this do to mars? I cannot imagine it would be something small would it have the ability to reshape the over all planetary landscape?

Im so scared will earth suffer anything if it hits mars

When is the next update? Is the comet's telemetry updated daily? Where should we click to receive it first?

This Comet will miss Mar's,but, appears to travel on and HIT Mercury head on ........Can that happen ???

Get Ready for Asteroid 2012 DA14
Southern Skywatch February 2013 Edition is now up.
The Sky This Week - Thursday January 31 to Thursd...
Comet C/2012 F6 Lemmon Update for February.
Not Seeing a Transit of Io
EldestOne is an Even Number Old.
Australia Day, 2013
This Australia Day 2013, Find The Southern Cross
Jupiter and The ISS, 25 January 2013
Sketching Jupiter (or No Jupiter Hasn't Tilted)