Did Elenin/Nibiru tilt Saturn (or How do Bleeping Telescopes Work?)

Stellarium vs telescopic view of Saturn as presented at http://www.scribd.com/fullscreen/60725711

There is a lot of silliness running about the intertubes at the moment about comet C/2010 X1 Elenin. I try to avoid the silliest, and talk about genuine confusions and misunderstandings, encouraging people to think critically and look at the sky.

But I have to respond to the latest silliness going around the intertubes, as it involves one of my favourite astronomy programs, Stellarium.

In a page hosted on scribd (see link above, it will be 10 minutes of your life you will never get back), amongst the usual claims (CW Leonis is Nibiru etc., see my FAQ and these posts to cover most of what is in this document) and some unusual claims (gravity doesn't exist) is the claim that Elenin/Nibiru has caused planet Saturn to change it's tilt.

The support for this claim is comparison between Stellarium predictions for the night skies appearance and actual telescopic images. It appears to have a lot of traction, given the emails I've been getting and the various discussion groups hosting these images (eg here).

Before discussing this, I'd like to get people to think about this claim though. Saturn is the iconic planet for amateur astronomers, thousands world wide will be watching it every
night. If Saturn had undergone such a massive tilt, why has no amateur or profession astronomer reported it? This would be news of the century, and would make an astronomers reputation (and why didn't the Cassini orbiter notice).
No, Saturn did 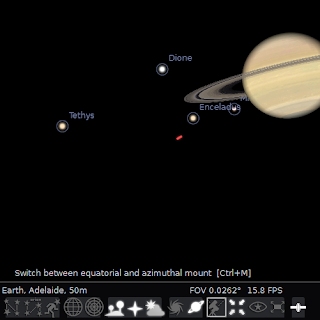 Most solar system visualization programs show the planets as we would see them from Earth, but telescopes invert the image, either a simple flip or upside down-back to front, depending on the optics involved (see http://www.spaceref.com/telescopes/Image-Orientation-Why-Is-Everything-Upside-Down.html for more of an explanation and of course here with diagrams).

When you compare a visualisation image with a telescopic image, they will look tilted with respect to each other.

And you can demonstrate this with Stellarium itself. If you look at the image to the right, you will see a small telescope icon (boxed in the image). This will swap between the "no telescope" view and various telescopic views.

Note that the telescope image prediction is tilted with respect to the unaided eye image, just as the real telescopic image is tilted (both images are "upside down" from the Scibd images because my simulation is as seen from the southern hemisphere).

Personally, I wouldn't take much stock in the writings of someone who doesn't realize telescope images are inverted.

At Christopher Go's astrophotography site you can see stunning images of Saturn going back to 2007. No Nibiru-induced tilt is seen.

Comments:
nasa said saturn tilted, but not because of a comet or so.
http://saturn.jpl.nasa.gov/education/saturnobservation/viewingsaturn/

I might buy into the facts you are saying, but as an astronomer you should know how to spell. im not sure if I beleive that Nibiru is or is not heading toward earth. Gravity does exist. I know I have scares to prove it...

Mercury and the Moon, August 1
Biting the Bullet
Comet 2009 P1 Garrad and M15, July 31
Revisiting Comet 2010 X1 Elenin, Earthquakes, Astr...
Carnival of Space #207 is here.
Southern Delta Aquarid Meteor Shower, 29-30 July,...
The Crescent Moon Near Mars (28 July)
Moon and Contrails
The Sky This Week - Thursday July 28 to Thursday A...
An Iridium Flare Near the Tail of The Scorpion