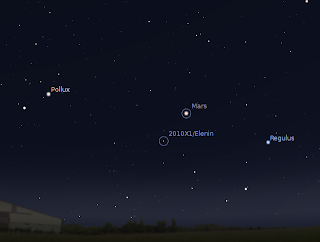 Elenin as seen from the southern hemisphere at closest approach in October.

As I’ve written before, I am not sure why comet C/2010 X1 Elenin is attracting so much attention from the Doom and Gloom brigade, when C/2009 P1 was predicted to be about as bright (it’s been downgraded now). But ironically there has been a new spate of videos (and here) claiming Elenin is a Bad Thing ™ at the same time as there has been lots of discussion in the comet observers lists as to whether the comet will survive its passage of the Sun.

The various claims about Elenin include a) it will hit us, b) it will cause earthquakes c) we will pass through the tail and unspecified Bad Things ™ will happen. 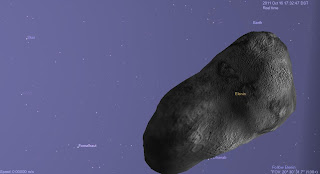 Elenin will not hit us. The closest it will come is around 0.24 AU (where an AU is the distance from the Earth to the Sun). That’s only a little closer than the closest approach of Venus to Earth, and roughly 100 times the distance from the Earth to the Moon. That’s really, really far away (you think it’s a long way to the shop if you want a sausage roll, but that’s nothing compared to space*).

As the comet passes through the asteroid belt as it is doing now, and is exposed to the small gravitational tugs its orbit will change very slightly. This is important to us guys with big telescopes who need to point them really, really accurately, but even if the orbit changes by the distance of the Earth the to Moon (which would be a pretty big shift), then Elenin is still nowhere near the Earth. Nor is the debris in the comets orbit going to hit. We might get a decent meteor shower, but I wouldn’t hold my breath. As it is, the comet has passed it closest encounters, and its orbit hasn’t changed appreciably.

Eleinin will not cause earthquakes, as I’ve written before, even at closest approach Elenin has less than a billionth of the tidal force of the Moon. It will do nothing. Passing through Elenin’s tail will do nothing, its tail will be doing a very good approximation of a vacuum (and its not even clear its tail will reach Earth). We’ve been through cometary tails before of bigger and brighter comets (eg Halley), and nothing has happened.

How big is comet Elenin, then. Lots of people are claiming it is “big” for example “..when i look at the size of the orbit that this thing is huge, heavy…”. Well, orbital radius has nothing to do with the size of a comet, lots of long period comets are quite small. In the case of Elenin, it’s around 3-4 km in size, a bit smaller than Halley (6x 16 Km). We have a reasonable idea of its size from its brightness. Roughly speaking, at a given distance from the sun, the bigger an object is, the brighter its is. Of course, this also depends on how dark it is as well. Comets mess things up a bit as they are brighter than you expect from their size alone, as they are surrounded by a coma of gas and dust reflecting the light of the Sun. Now, comet Elenin is currently roughly magnitude 14, if it were the size of say, the asteroid Vesta, with a diameter of 530 Km, it would be at least magnitude 7 at its current distance. So Elenin has to be fairly small.

We’ve seen all this panic before. In 2006 Comet 73P/Schwassmann-Wachmann came within 0.08 AU of Earth, 3 times closer than Elenin. The comet disintegrated spectacularly, and Earth passed through its tail. There were cries of doom, destruction and catastrophic earthquakes …. and nothing happened. Just as no disaster struck in 1996, 1983 (two very close comets), 1961 and so on when other, more impressive comets came closer to Earth than comet Elenin will.

Now I mentioned that comet Elenin might evaporate. The cometary community has been keeping a close watch on Elenin. It’s not spectacular but still interesting and should be a nice binocular comet. If it survives perihelion. It is an intrinsically faint comet, and its light curve is developing in a manner similar to other comets that have vaporized on perihelion approach. After all, they are just dirty snowballs, or icy dirt balls, often barely hanging together. The gas pressure that develops as the comet comes close to the Sun can tear it apart into small icy chunks which rapidly evaporate.

Currently opinion on the comets list is that Elenin has a 50% chance of surviving. But as with all comet predictions we will need to keep a close eye on Elenin as enters the inner solar system. I hope it makes it; I’m looking forward to imaging the comet. Still, it would be interesting to see the conspiracy theorists reactions if Elenin evaporated when it got close to the Sun.

Comments:
ya it's only 3-4km but thats not the coma to. with the coma it comes out to be a couple thousand km. watch this the sun will be blocked out on sep 26th 2011
http://www.youtube.com/watch?v=LLIvMwxLZUQ&feature=channel_video_title

elenin said the coma is a couple thousand times bigger then the nucleus.

go here look at the pic that they have up there seems to be some order that they are in 4 comets on both sides then a comet in front i dont know what to make of it.

You realise that the coma is a very thin haze of dust and gas that would make a reasonable vacuum here on Erath (and that several spacecraft have passed through the coma of comets with no ill effect).

Even if the comet did go directly in front of the Sun on the 26th (which it doesn't, from the point of view of Earth it misses the Sun's disk by several degrees), and the Coma was solid matter rather than thin gas, you would need a telescope to see the tiny dot cross the face of the Sun (it's a fraction of the size of Venus, and even Venus looks like a dot traversing the Suns disk).

I have discovered that Comet C2010 X! Elanin will appear to pass very close to the Pleiades Star Cluster on November 22, 2011. If it survives perihelion, it should make for some spectacular astrophotography.

Thanks for the reassurance. Your comments make sense based on current data and the object being correctly identified. Are there any spectrographic pictures of the comet to show its composition?

If it doesn't evaporate will it appear as a large object when it passes near the sun. Comet Mc Naught was much further away when its coma grew and that looked spectacular through telescopes

This article isn't very helpful. Its like bringing a flashlight to a haunted house. Could you do me a favor, you and your friends get together and make a fake article with lots of big words and made up math that shows the comet will cause huge destruction to the planet. Make make some fake pictures that resemble a space ship. Something fun. OHHH a cover up or conspiracy with the US government is always good. PLEASE....

I'm Just a curious reader, i read somewhere online that when the comet passes the asteroid belt, there is a possibility it might hit an asteroid or cause one to change orbit and be hurled towards earths gravitational pull.

I don't know what to make of this. But this is worth a read.

No, its not interesting, it's nonsense on stilts. see http://astroblogger.blogspot.com/2011/08/did-eleninnibiru-tilt-saturn-or-how-do.html

Maheinicke here, The scribd pdf is junk. Some 8th grader with no interest in video games wrote that. Lauren found it, and a few youtubers brought it up. Saturned ring did not tilt either. If they did there would have been a massive debris field that would have made most of saturn blocked out. Debris would have went everywhere. If that were even possible, this comet would rip the mantle off of the earth like water balloon being popped in slow motion.

it's not comet, but a brown dwarf suppose to be huge. But sadly there's too much disinformation, saying it's just a cute comet, without any repercussion but I think It will be devastating.
www.youtube.com/watch?v=0Yu_Wsa_hR0

Hello Mr.Musgrave
Thanks once again for putting our minds at ease .I think some people,myself include for a time , have invested so much emotional energy ,money and resources into preparing for "the apocalypse"that it is almost hard for them to hear we are fine and they may have been duped ....They fail to realize that if there is a conspiracy involving the government it isnt that a comet is coming towards us and they are not telling us ...I.. think it is quite the opposite dont these sheeple even realize that maybe doomsday is a racket .As I posted under another thread I myself spent several thousand dollars buying up supplies food generator survival gear which is well over 10, 000 dollars ... not to mention the intrest of course its all on credit ..its the american way !LOL..imagine all those folks that got underground bunkers those are like 50,000 dollars .A link to your blog and an article showed up on Google's first page as the 3rd choice where you answered peoples questions to put there fears to rest ....then ten minutes later it was moved 5 pages away this happened over the course of several days .also I wondered why Nasa was completely quiet .They havent said word one since may .I cant beleive how many people are arguing with you its like they want to fight and be miserable !I am relieved you have come forward !It is like a bright candle in the darkness !

No, it is not a brown dwarf, see the FAQ link on the left panel for links and details.

This comet isn't worth worrying over if Ceres were to turn for the worst then you start worrying because that's a huge asteroid and if it hit us the results would be cataclysmic but it's steady and deep in the main belt.