The Last Quarter Moon is Monday April 25. Venus is visible in the morning sky in the constellation of Pisces. Mars, Mercury and Jupiter are visible below Venus in the early morning. Mercury and Jupiter become more prominent the week, and Jupiter closes in on Mars. Saturn is well placed for telescopic observation in the evening sky. 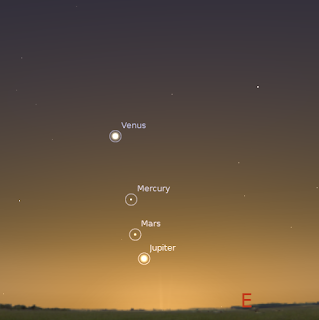 Morning sky looking east as seen from Adelaide at 6:00 am local time on Monday April 25 showing Venus, Mars, Mercury and Jupiter in Pisces. Similar views will be seen elsewhere at the equivalent local time. Click to embiggen.

Mars is visible in the eastern twilight below Venus. As the week progresses it will become even more prominent. Mercury and Jupiter are below it in the morning sky. Mercury continues to climb rapidly and draws away from Mars closing in on Venus.

Jupiter appears low on the horizon (4 degrees half an hour before sunrise), but should be readily seen if you have a fairly clear, level astern horizon. During the week Jupiter climbs higher and closes in on Mars 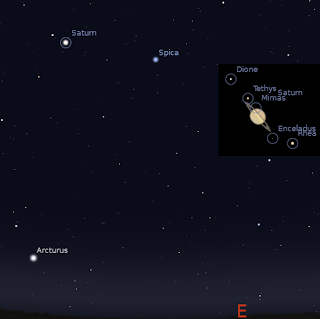 Evening sky on Sunday April 24 looking east as seen from Adelaide at 8:00 pm local time in South Australia showing Saturn near Spica. Similar views will be seen elsewhere at the equivalent local time.

Inset,the telescopic view of Saturn on the 24th , you will need a fairly large telescope to see any moon other than Titan. Click to embiggen.