The Full Moon is Monday April 18. Venus is visible in the morning sky in the constellation of Pisces. Mars is visible below Venus in the early morning. Mercury and Jupiter join them this week, with Mercury close to Mars on April 20. Saturn is well placed for telescopic observation in the evening sky. 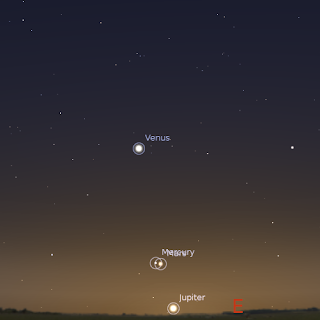 Morning sky looking east as seen from Adelaide at 6:00 am local time on Wednesday April 20 showing Venus, Mars, Mercury and Jupiter in Pisces. Mars and Mercury are at their closest at this time. Similar views will be seen elsewhere at the equivalent local time. Click to embiggen.

The Full Moon is Monday April 18.

Jupiter appears low on the horizon, but only later in the week is it appreciably high enough (4 degrees half an hour before sunrise), for it to be readily seen. Even then you will need a fairly clear, level eastern horizon to pick it up. 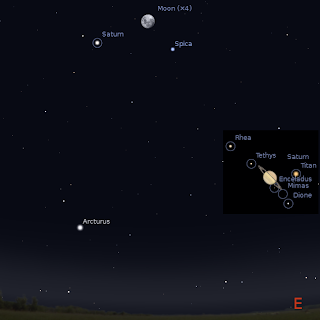 Evening sky on Saturday April 17 looking east as seen from Adelaide at 9:00 pm local time in South Australia showing Saturn near Spica with the Moon between them. Similar views will be seen elsewhere at the equivalent local time.

Inset, the telescopic view of Saturn on the 17th , you will need a fairly large telescope to see any moon other than Titan. Click to embiggen.

The asteroid Vesta is quite faint (magnitude 7.6), so you need binoculars to see it and may need to watch over a number of nights to make sure you are seeing it. Currently Vesta is not near anything interesting. Vesta is brightening and will be (just) visible to the unaided eye in a few months time. A chart showing Vesta's location is here.

Rally for Research Tuesday in Sydney, Melbourne, A...
Carnival of Space #192 is here.
Will C/2010 X1 Elenin, the Comet of Doom, Evaporate?
“Yuri’s Night”, Free Movie Screening Tuesday 12th ...
Carnival of Space #191 is here.
The Sky This Week - Thursday April 7 to Thursday ...
Homeopathy Information
Blogging 101 and Beyond! (SA Science Communicators...
Kleopatra, a Bone Shaped Asteroid with Two Moons
Images From MESSENGER at Mercury