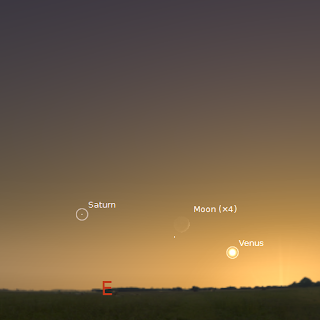 Morning sky looking east as seen from Adelaide at 5:47 am daylight saving time on Friday November 5 showing The crescent Moon between Saturn and Venus. Similar views will be seen elsewhere at the equivalent local time. Click to embiggen.

The New Moon is Saturday November 6.

Saturn has returned to the morning sky too, it's actually been there a while, but because it is fairly faint compared to Venus, it has been hard to pick up until now. It still will be hard, but you should be able to see it a bit over half an hour before sunrise by the end of the week. 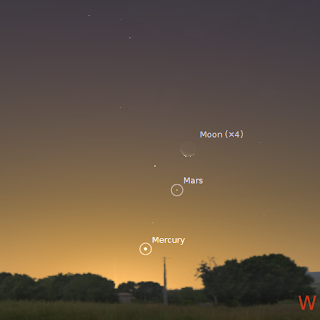 Mercury is climbing higher in the evening sky but it never gets very high above the horizon. You will need a clear level horizon to see it. On the 7th the crescent Moon is just above Mercury.

Mars is becoming harder to see in the twilight. It and is the second brightest object above the western horizon, after the red star Antares (which means Rival of Mars). During the week Mars draws closer to Antares.

The variable star Mira is very bright. Now that the Moon is heading for New, you can follow it's changes in brightness. 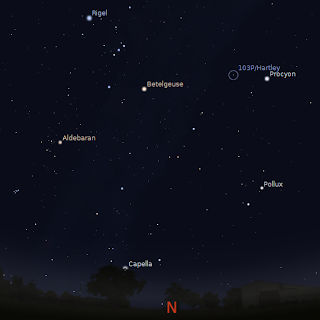 Comet 103P Hartley above the northern horizon at 4:30 am ACDST (3:30 non-daylight saving time) as seen from Adelaide on November 6, similar views will be seen from other places at equivalent local time.

Comet 103P Hartley 2 rises higher in the southern skies this week. It is high in the sky, not far from the bright star Procyon, but the comet is fading, and will be at the very threshold of unaided eye visibility from dark sky sites. And you do have to get up at dark o'clock to see it.
Unfortunately, at the beginning of the week, the waning Moon's light will wash out the comet.

With the Moon fading towards New the comet will be easily seen in binoculars, and it races through the sky through some pretty territory.