Another Chance to See Jupiter's Moons with the Unaided Eye 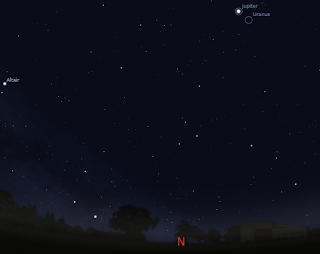 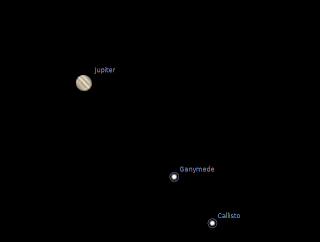 Left image, Jupiter at 9:30 pm daylight saving time on Friday 29 October as seen from Australia; Right image, Orientation of the Moons, Callisto and Ganymede will be to the right and below Jupiter.

As I've previously mentioned, Jupiter's moons are bright enough to be seen with the unaided eye. However, they are so close to bright Jupiter that the intensity of it's light (and the optical imperfections of our eyes), makes it impossible to see them except under special circumstances.

Probably our final opportunity this opposition to see them with the unaided eye is on Friday, October 29 and Saturday October 30. Ganymede will be at its maximum separation from Jupiter at around 9:30 pm daylight saving time, when Ganymede will be at 300 seconds of arc from Jupiter, greater than the 208 arc seconds of epsilon Lyrae, a double star that is just separable by people with good eyesight, and almost as big as the easily separable alpha Capricorni (380 arc seconds). 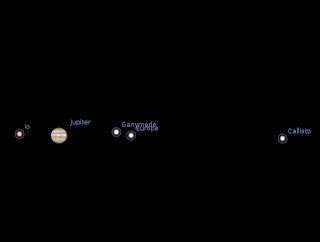 Orientation of the Moons, on Saturday 30 October at 11:30 pm daylight saving time. The image is the same scale as above, Callisto will be to the right and below Jupiter

You will have to wait until 11:30 pm on Saturday 30 October for Callisto, when it will be 6o0 arc seconds from Jupiter (about 1/3 the diameter of the Moon), but at magnitude 5.7, you will need a dark sky site to see it. If you are willing to wait until 3:30 am Sunday , it will be slightly further away, but this shouldn't make much difference.

You will need a handy wall or post to block Jupiters' light. Stand so that you can hide Jupiter behind the blocking object by just slightly turning your head. When I was doing this back in September, I found I needed a quite distant object. otherwise Jupiter was covered in one eye, but uncovered in the other (lousy parallax), which was quite disconcerting. You may need binoculars to help orient yourself.

Move so that Jupiter just is blocked, then allow your eyes a few moments to adjust from the brightness of Jupiter, and the Moon should "pop out". Ganymede will be easier to see than Callisto, due to its brightness.

Comments:
Ian, a few years ago I did some research into naked eye observations of Jupiter's moons. I was investigating the possibility that it was Jupiter (and not Venus) that the San or Bushman people of South Africa regarded as the "Dawn's Heart Star". The Bushmen were renowned for their acute eyesight. For the whole story, see: http://assa.saao.ac.za/html/Jun2006/2006MNASSA..65..66.pdf

One reference in particular, (Schaefer, B.E. (1991) Glare and Celestial Visibility) addressed exactly this issue of seeing faint objects in the glare of bright ones and was quite useful to use as a benchmark of what is possible.

A Meteor Shower from Comet 103P Hartley?
Revisiting the Comet Crash
Mira is Brighter!
Imaging opportunities for comet 10P tempel and ast...
Carnival of Space #175 is here.
Comet 103P/Hartley near M35
The Sky This Week - Thursday October 28 to Thursda...
Best Outdoor Chess Set Ever
A Busy Day at Jupiter
...And the Comet goes Crash!