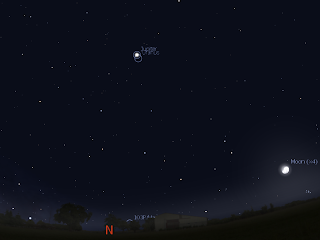 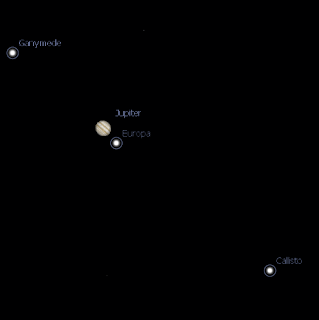 Left image, Jupiter at 11:00 pm on Monday 27 September; Right image, Orientation of the Moons, Callisto will be to the right and below Jupiter, Ganymede will ne up and to the left.

It is not commonly known, but Jupiter's moons are bright enough to be seen with the unaided eye. However, they are so close to bright Jupiter that the intensity of it's light (and the optical imperfections of our eyes), makes it impossible to see them except under special circumstances).

A good opportunity is on Monday , September 27. Both Ganymede and Callisto will not be at their maximum separations from Jupiter (Ganymede's occur during the afternoon, and Callisto's after the Moon has risen), however at 8:00 pm Ganymede will be at 336 seconds from Jupiter, greater than the 208 arc second of epsilon Lyrae, a double star that is just separable by people with good eyesight, and almost as big as the easily separable alpha Capricornii (380 arc seconds).

Callisto will be 630 arc seconds from Jupiter, but at magnitude 5.7, you will need a dark sky site and blocking Jupiter's glare to see it. You will also need to look before the Moon rises high enough in the sky to drown out its light.

You will need a handy wall or post. If looking for Ganymede earlier in the evening, a horizontal object would be better, as Ganymede is more above Jupiter than to the side. Stand so that you can hide Jupiter behind the blocking object by just slightly turning your head. Move so that Jupiter just is blocked, then allow your eyes a few moments to adjust from the brightness of Jupiter, and the Moon should "pop out". Ganymede will be easier to see than Callisto, due to its brightness.

Comments:
No sign of Jupiter here last night, too much cloud :-(

I enjoyed reading your post. I was able to capture this event with my Nikon, VERY exciting!

Me, Mercury and the European Planetary Science Con...
Carnival of Space #170 is here.
In which I am Revealed as an Idiot
The ISS shoots the Moon from Adelaide tonight (Wed...
Where's comet 103P/Hartley? (Septmber 21, 2010)
Opposition of Jupiter Tonight, Tuesday 21 Septmber...
The Sky This Week - Thursday September 23 to Thurs...
Go to the Zoo Tonight! (Adelaide)
Comet 103P/Hartley near PGC 71451
We did the Fun Run