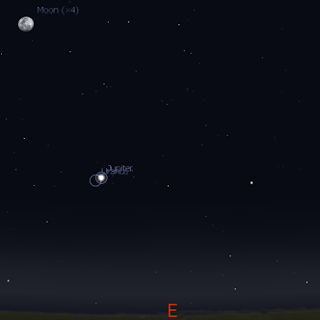 Evening sky looking East as seen from Adelaide at 8:30 pm on Tuesday September 21 showing Jupiter close to Uranus. Jupiter is at opposition at this time. Similar views will be seen elsewhere in the Southern Hemisphere at the equivalent local time. Click to embiggen.

Jupiter is at opposition tonight, when it is biggest and brightest as viewed from Earth. Technically, Earth is directly between the Sun and Jupiter. The opposition is particularly good, as Jupiter is at perihelion, when it is closest to the Sun, in March 2011. So Jupiters' closest approach to earth nearly coincides with its closest approach to the Sun.

You don't have to worry about rushing out tonight though. Jupiter is so big that it is always a good target in binoculars to small scopes, but for the next few weeks you should be able to see it with superb detail, when it is 30% bigger than at furthest approach. 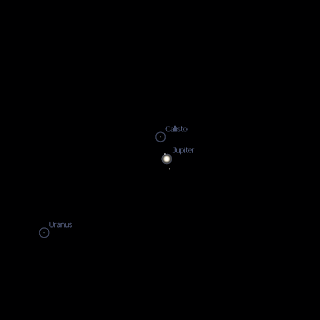 Tonight is the last night Jupiter and Uranus can be seen together in low power telescope eyepieces. After this they drift apart again.

Jupiters Moons are a excellent, whether you have binoculars or a telescope. On Tuesday 21 September, there is not only the opposition, but there is a transit and shadow transit of Io as well. at a reasonable hour of the evening 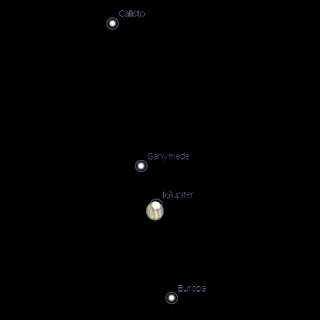 By the time Jupiter is high enough in the sky to see in a telescope, Io and its shadow will be already on the face of Jupiter. To see Io and its shadow on Jupiter you will need a fairly decent telescope, but even in small telescopes you will see Io emerge at 20:56 (AEST) or 20:26 (ACST).
When Io has exited, the great red spot makes its way across Jupiters' disk about an hour later .

There are lots of opportunities in the rest of the month to see several interesting Jupiter Moon events (scroll down until you hit Jupiter and its moons).

The Sky This Week - Thursday September 23 to Thurs...
Go to the Zoo Tonight! (Adelaide)
Comet 103P/Hartley near PGC 71451
We did the Fun Run
Tonight is International Observe the Moon Night
Off to Run
The Moon in 3D!
Comet 103P/Hartley meets a Galaxy (and other images)
Geo-xcentricities; you too can be Galileo with jus...
A Tale of Two Iridium Flares