Return of the Zombie Mars Hoax that will not Die 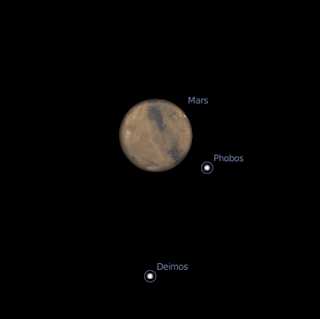 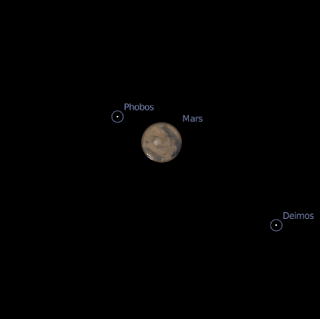 Left image, telescopic view of Mars as seen from Earth during the August 2003 opposition, Right Image, Mars at the same scale as will be seen at the next opposition on 30 January 2010.

Once again, as it has every two years since 2003 during the Great Opposition of Mars, the Mars Hoax is back. People are receiving very long and graphic heavy emails claiming Mars will look as big as the Full Moon in August, the time of the 2003 opposition. Even in 2003, Mars would not have looked as big as the full Moon. Mars was 25 arc seconds across, hardly the diameter of the full Moon even through a modest telescope. The Moon is 0.5 degrees across, about half a fingerwidth, Mars was less than 1/60 of that. The human eye can only see things larger than 1.2 minutes of arc as anything other than a point, and Mars was a 1/3 of this limit in size.

The images above would only be seen through powerful telescopes. This set of images taken with my Webcam gives a better idea of what someone would have seen with a modest telescope.

Mars is not even at opposition this year, it will be at opposition on 30 January 2010, with a rather ordinary apparent diameter of 14 arc seconds (see righthand image above). This will be a visible disk in even small telescopes, but you will need a modest diameter scope to see reasonable detail. Mars will be smaller still at the 2012 opposition but starts increasing in size again after this and will be at a similar size to 2003 at its July 2018 opposition (24 arc minutes across).

Yes, it's disappointing that Mars won't be big, but let's use this as a learning moment. Why does Mars's apparent size at opposition keep changing? 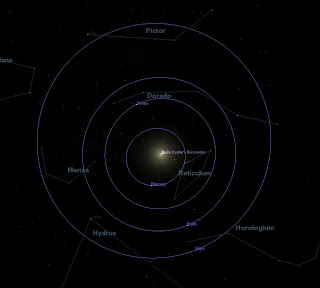 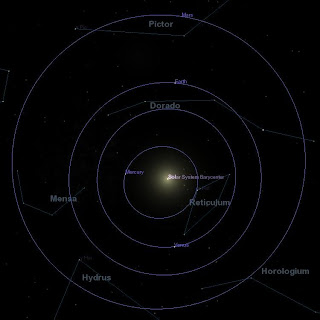 Left panel, Mars and Earth at the time of the great opposition in 2003. Right Panel, Earth and Mars at the 2010 opposition (click images to embiggen). Note earth and Mars are much closer in 2003. If you have Celestia, you can model the oppositions and see for yourself.

Now, if Mars's orbit was an integer multiple of Earth's year, then Earth and Mars would be closest at the same time each year. But they aren't. Mars's year is roughly 1.9 times longer than that of Earth, so the time of Mars's closest approach to the Sun drifts with respect to Earth's furthest distance from the Sun. Earth's Aphelion and Mars's Perihelion align roughly every 15 years. But again, because the years are weird fractions of each other (as well as other orbital jiggery pokery), some alinements are better than others. August 2003 was the best for approach for thousands of years, but the 2050 opposition will only be a smidgen smaller.

Mars may not be as big as the Full Moon at the moment, but it is in some beautiful territory at the moment. As Mars grows brighter and brighter, and comes close to the Beehive cluster, it will be a magnificent sight.

Comments:
There is hope: A rational PowerPoint presentation about Mars in August:

Science Alive! 7-9 August 2009
The Heart of the Milky Way, with added Meteors
The Sky This Week - Thursday August 6 to Thursday ...
The Big Aussie Starhunt is Coming!
Carnival of Space #114 is here.
A Missed Anniversary and A Tale of Server Statistics
Cloudy, Cloudy Sky
Southern Skywatch August 2009 edition is now up!
Beware the Spinal Trap - Solidarity edition
Occultation of Sigma Scorpii - July 31