I’m writing this post especially for the 100th Carnival of Space, because it involves the 400th anniversary of Galileo looking through his telescope, so the post is a double 00 double whammy. It also combines my love of astronomy and science history with my love of biology.

The article it is based on is old news though. Italian Scientists are trying to recover DNA from Galileo’s remains. Amongst other things they wanted to understand was the source of Galileo’s blindness and why he saw Saturn as an object with “ears”. The first is a reasonable question, although probably not answerable. The second question is not, as a bit of thought (and a bit of history) would reveal.

What about Galileo’s blindness? Surely he went blind from observing the Sun through his telescope. Well, that’s a very common perception, but no he didn’t. Galileo observed sunspots from around 1611 to 1614. However, Galileo didn’t become blind until he was 68, nearly 30 years later. Furthermore, he became blind in both eyes. Even if you take the line that subclinical photodamage to his eyes developed progressively into blindness, this should have only occurred in the dominant eye he used for observation not both.

Now, for a dramatic example of what happens when you look at the sun directly through a telescope; look at this video...nasty isn’t it. Why didn’t Galileo’s eye boil? Firstly, he observed only very close to sunset, when the Sun was dimmed by atmospheric haze. That, and the optics of his telescope dimmed the image of the Sun as well. Secondly, while he did some direct telescopic observations (again, around sunset when the suns image was dim), during 1612 he started using a projection technique, so the period when he was directly observing the Sun was short.

So, if we want to find out why Galileo went blind what sort of diseases should we be looking for? Well, they have to be diseases that occur relatively late in life, and cause blindness in both eyes. This leaves out the majority of mitochondrial gene diseases, which tend to occur in early life. This is a bad thing for our researchers. Galileo’s body wasn’t preserved with future DNA specialists in mind, so his body has undergone substantial decomposition. Which means the DNA in the nuclei of his body’s cells have decayed too, and been chopped up into little fragments. This is not such a big problem for mitochondrial DNA, that gets chopped up too, but there are lots of copies of mitochondrial DNA (as there are lots of mitochondria, the powerhouses of the cell) so it's more likley you will recover enough fragments to make sense of the genes. The first DNA recovered from Neanderthal remains was mitochondrial DNA for example.

So, with Galileo’s nuclear DNA in little fragments, finding disease genes is going to be hard. What sorts of blindness that occur in both eyes in old age are known to be associated with genetic defects? Macular Degeneration is the commonest form of blindness in old age in western countries, and is associated with genetic defects. However, there are a wide range of defects associated with this disease, they don’t all occur in the same individual (or even in all diseased individuals), and require environmental interaction. So, if Galileo had Macular Degeneration, your have to scrummage through huge numbers of gene fragments looking for disease genes which may not even be there.

Worse still, Macular Degeneration is probably not the condition Galileo had; it doesn’t really fit the description given of Galileo’s disease. There have been a couple of proposals, one is a combination of glaucoma and cataracts which is still quite common, another is he had bilateral iridocyclitis due to his rheumatoid disease. Neither of these diseases has strong genetic linkage, so any attempt to diagnose these causes of Galileo’s blindness from his DNA would be marginal at best, even if Galileo’s DNA wasn’t in lots of itty bitty hard to assemble fragments.

So diagnosing Galileo’s blindness is a pretty marginal ask, even if we had his intact DNA. What about Galileo’s views of Saturn? Galileo wrote to Kepler in code, after his observations of Saturn, "I have observed the highest planet tri-form." Galileo saw Saturn as a triple planet, or sometimes as a planet with “ears”. Why didn’t he see the rings as rings, was his observations in 1610 (before he did any solar observing) and indication of incipient eye disease, which we could pick up browsing through his genes? 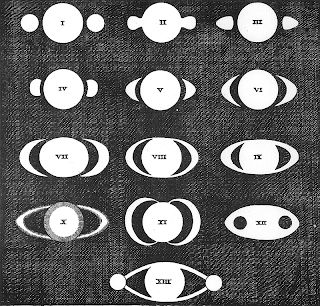 We don’t need genetics to explain this. Galileo’s strongest telescope was only 30x magnification, and it’s optics, although finer than almost anyone else’s, were no where near modern standards. Furthermore, no one had experience of ringed worlds. Galileo had to struggle to interpret what he saw through his telescope with no analogues to guide him. If you were to look through a 30x scope today, the rings of Saturn are not particularly obvious, but because we know they are rings, it is easy for us to understand what we see. Another reason to suppose we don’t need a genetic explanation is that no one else could make out Saturn’s rings either; people saw a multitude of bizarre shapes (see Christian Huygens drawings left). So either there was an epidemic of genetic-induced eye diseases making astronomers incapable of seeing Saturn’s rings, or a more mundane explanation is responsible; imperfect telescopes and the sheer unanticipated nature of the observations. It took a combination of better telescopes and systematic observation to discover Saturn was a ringed world.

Galileo revolutionized the world of astronomy, and his blindness was a tragic denouement to a career based around observation. Our curiosity drives us to understand what disease it was that caused it, and I wish the researchers well, but I suspect they will find nothing concrete. But to try an explain Galileo’s visions of Saturn by genetic disease is a fools errand, and one that ironically flies in the face of Galileo’s own commitment to observation. This, the need to find explanations in genes, is a different sort of blindness.