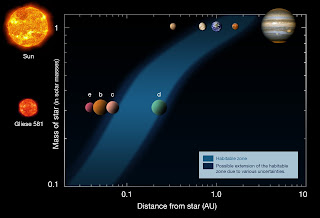 The Gliese 581 system delivers again. Giese 581 is a red dwarf star 20.4 light years away that until recently boasted the lightest extrasolar planet ever found. At 5 Earth masses, Gliese 581c was not exactly a second Earth, but it and 7 Earth mass Gliese 581d captured the worlds imagination as they seemed to be in the habitable zone of their parent star, where liquid water can exist.

Importantly, the orbit for Gliese 581d has been refined too. It is now definitely within the habitable zone of its star. Gliese 581d is likely very unlike Earth, and it and Gliese 581c are probably water worlds. The refinement of the orbit of 581d means it is very-likely covered in liquid water, when the planet was first described it seemed more likely it would be an ice world (but Gliese 581c is more likely to be Venus-like). 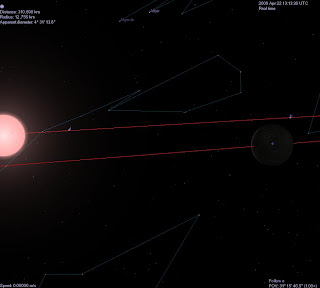 Unfortunately, even though Gliese 581 is so close that we can almost touch it, astronomically speaking, we won't be travelling there for a while. You can go there virtually though if you have the 3D space rending program Celestia, I have made an ssc file for the Gliese 581 system. If you have Celestia 1.5 and above, the program already comes with Gliese 591b, c and d (you will have to comment b and c out in my file, and comment out d in the extrasolar.ssc file as it has the old orbit).

Download the file Wolf_562.ssc (the alternate name for Gliese 581) and put it in your Celestia extras folder and go exploring.

For the original ESO press release go here. For a PDF of the discovery paper go here. And a Nature News commentary is here.

Naturally the blogosphere has already caught on. Here's Stuart's take, Centauri Dreams, Dynamics of Cats, Starts with a Bang (and his update here), Science After Suneclipse on how long it would take to get to Gliese 581 and the Questionable Authority on what this means for finding alien civilizations (and how much you would weigh on Gliese 581d).

Comments:
Hi Ian,
I am also very excited about the discoveries. I wrote a science fantasy YA novel with the concept: It's Brokeback Mountain and one of them gets pregnant...

Anyway, the manuscript is complete and I will pitch it soon. Look out for 'Mama Boys' and see how the Gliese discoveries finally make Peace to Earth a possiblity...
talk to you after the weekend, I am going camping now...
Susanna Kramer