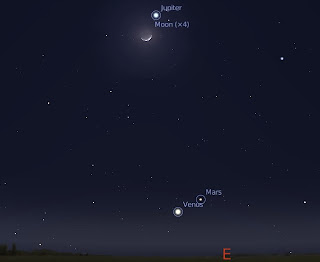 The eastern morning sky at 5:00 am ACST as seen from Adelaide at 5:00 am. Similar views will be seen elsewhere in Australia at the equivalent local time (and yes, it will still be pretty cool around 6:00 am, if 5 is too early).

The morning of Monday, April 20 will be rather nice with the Crescent Moon just below Jupiter and Mars and Venus below it. With Jupiter a mere 3 fingerwidths from the Moon, this is another opportunity to try and see Jupiter in the daytime (or at least shortly after sunrise). Locate the Moon and then look up and to the right a little, you may (just) see a bright dot that is Jupiter (and always make sure the Sun is hidden behind something very solid so as to protect your eyesight).

Keep watching, on April 22 and 23 the narrowing crescent is close to Venus and Mars (which are also close) to form a very nice triangle. Also keep an eye out for Irridium Flares. You may even see a Lyrid meteor or two while you watch.