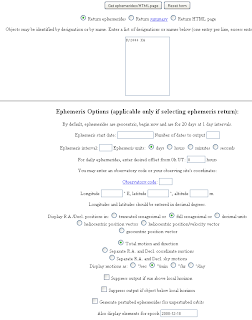 In a previous post I gave links to Celestia SSC files you could download in order to see C/2003 K2 Christensen from the point of view of the STEREO space craft (and Earth). But what happens if a new comet appears and you want to see where that is in Celestia (and from the POV of the STEREO spacecraft)? Well, you could wait for me to make an SSC file for that comet and post it, or you could make your own. How can you make your own SSC files?

First off you can ignore everything under InfoURL, they are made up figures as newly discovered comets will not have this data. All you really need is the orbital elements, so where do you get these? From the Minor Planet Center, where else?

Now, you can get them in three ways, if the comet is really recent, you can look up the Minor Planet Electronic Circular. Otherwise, you can use either the Orbital elements of comets page, or you can use the Minor Planet Comet and Ephemeris Service. As a demonstration, I'll use the Ephemeris service. After clicking on the ephemeris service link, scroll down and type your comet in the box (use P/2008 X4 for this demonstration), then scroll down the Ephemeris Options below, ignoring all except the "Also display elements for epoch" box. Type the current date in there using year-month-day format 2008-12-18 (see image above, click image to enlarge). Ignore everything else and click on the Get Ephemeris button.

Where is the Period you ask? Good question, it's not there. But see the link up the top?

Perturbed ephemeris below is based on elements from MPEC 2008-X81.

Click on the hyperlink, scroll down and just before the residuals you will find P 5.66. This is the period. This won't work for all comets, the old, established comets don't have that link but new ones will (obviously the name of the link will be different for other comets).

Alternatively you can use the JPL Horizons system (a PDF tutorial on using the system is here) In the JPL Horizons system Epoch=Epoch W = ArgOfPericentre, OM = Ascending node, IN = Inclination, EC= eccentricity, QR = PericenterDistance, PER= period and MA= mean anomoly (when given). However, the JPL Horizons system currently gives the WRONG orbital elements for P/2008 X4, it uses the old P/2003 K2 elements, which is why I didn't go there in the first place. If you are lucky your comet will be listed in Wikipedia (here is a list of all currently known period comets, but without C/2008 X4).

For known comets that aren't currently included in the Celestia main download, go to the Celestia Motherload comets page. There is a full catalog of periodic comets there (minus P/2008 X4 of course), but if you download that into extras and turn the orbits on, you won't see a thing for comet orbits. It may be best if you store this file somewhere else and extract comets as you need them.

Selden Ball has a list of instructions for converting MPC elements to Celestia format which is mots helpful (and also helps with other formats like the JPL Horizons format). He also has a neat list of Celestia resources which you might like.

Thought I'd drop you a line and say thank you for such a great blog. My girls and I have been really enjoying it. We got a great photo of the moon the other night thanks to your information.

I'm pleased I've been ale to help you enjoy our great night skies! Don't forget December 29th, with the occultation of Jupiter. Hope you have a Merry and Safe Christmas and New year down at the farm!

I am running celestia 1.6.1 on windows 7. I want to change a 3d mesh. I have tried editing software to change the Mesh, but it will not allow me to save the .ssc file that I modified. Can you help?


hello, I want to make a ssc file. on the shuttle Discovery docked to the Mir station , I have to do to create the ssc . Ferry ?

That is a lot more complicated. You should start by looking at the Mir files in the Celestia Shatters archive,you will probably need XYZ files or the more advanced orbital mechanics files to cover this.After perusing these files, you may need to ask in the forums.