Yet another World Wide Telescope Review 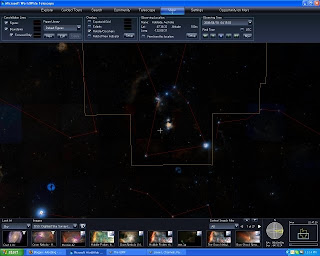 Yes, I've downloaded and tried out Microsofts World Wide Telescope too. Like Stuart and DaveP, it was fairly painless to install, unlike their experience, my downloads and set-up were s-l-o-w. Painfully so. If you are in Australia on a bog-standard ADSL line, with an ordinary computer (and just using Windows 2000, not Vista), be prepared to wait a bit. 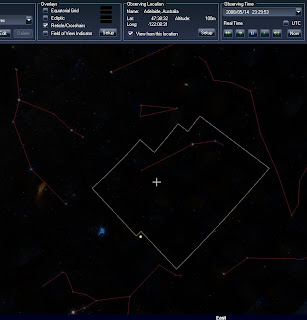 And boy, is that screwed. World Wide Telescope shows Taurus rising in the east at my location and time (see image to the left, the blob above the eastern horizon is Pleiades), when it should be well below the western horizon. Nice one Microsoft.

At least the WWT's search function finds the Pleaides, Google' s still takes you to the Southern Pleiades. The various Hubble, infrared sky survey etc. overlays are nice, and more easily accessible than the same things in Google. The finder scope (you pull it up by right clicking) is cute, but not really that informative compared to the irritating dotty things in Google sky (one large irritating things versus lots of small irritating dotty things, meh!).

It's also got the potential to drive a telescope via and ANSCOM driver. But if you have to have the computer linked to the internet for the DSS images to work, then that is pretty limited.

Planets suck in both WWT and Google Sky. At least WWT doesn't have the weird time system that by default displays planets in the past. When you zoom in on Jupiter in WWT, the moons are in the right position for your time zone (which sort of makes up for the general planetary suckiness).

Otherwise, the program freezes at irregular intervals, the planetary tour doesn't work for me (I get the text but not the images).

So, not bad. Sluggish and requiring a grunty computer like most things Microsoft. Fun to play with, but won't be replacing SkyMap or Stellarium any time soon. (see the cool things DaveP found here and here, one of then is near the bottom left in my top image)

Comments:
Do you know how to run a computer? You need to get help when you run programs.