Comet 17P/Holmes, will I ever see you?

Got up at 3:30 am this morning. The sky was clear except for a band of cloud, you guessed it, right where Holmes would have been. Comet Loneos was hiding behind a cloud yesterday, and today the entire horizon was clouded out. sighs expressively.

Have some nice pictures instead. Here, here and here. Don't forget SpaceWeather and IceInSpace as well for great images.

Here in Adelaide we have been having storms and gale force winds, so seeing comet 17P/Holmes has been out of the question. A lot of Eastern Australia seems socked in too. However, comet Holes is still relatively bright, around magnitude 2.2 to 2.5. So if you have the chance, have a look, a downloadable spotters chart for the Southern Hemisphere is here.

Here is a great animation of development of comet Holmes, some fantastic images from the Arkansas Sky Observatory (scroll down). Some more images here, some from Carl Hergenrother here, and some stunning ones from Dan Lessmann. The Bad Astronomer has a nice shot through his scope. Tom has a very nice telescopic image too. And here are some comet pictures from Dave Herald in Australia

With all the excitement over Holmes, don't forget comet LONEOS.

Once again I dragged myself out of bed at 2:00 am, this time with map prepared and walking shoes ready .... and the northern sky was clouded out below the Pleiades. I waited a while, but the cloud didn't shift, so I went back to bed.

While I was sleeping, people around the world were taking fantastic images. This one from Quanzhi Ye shows amazing jets in the coma of the comet. The comet looks like a ball of cotton wool in this image from Simone Bolzoni. Toni Scarmato has lots of good images on his page. R Ferando has a pretty amazing animation of the comet. Bart Declercq has some great images of the coma. Images taking at the 1-m scope at the Pic du Midi , by F. Colas and J. Lecacheux shows the incredible development of the coma over time. An image from Philip Jones showing the comet as a ball of cotton wool. Martin McKenna has a great widefield shot from Ireland.

The comet remains bright and visible to the unaided eye, even in Moonlight. The light curve of the comet can be followed here. Southern Hemisphere charts can be found here. Australian observers have been successful in picking up the comet. So if you are a night owl, there is still a chance to see it.

In the bloggoverse, Stuart has a heads up, the Bad Astronomer has some very nice pictures, DaveP has cloud like me, Tom got some pictures he will post later and Top Of The Lawn has a very nice shot indeed.

Well, I could have seen comet Holmes

If it weren't for the houses in the way. Despite the full Moon, I could see stars down to magnitude 3 easily by eye, and binoculars showed a lot more. But where the comet was was covered by houses. I just live too far south. I must also make a note to myself to print out my spotters map before getting up at 2:30 am, instead of lurching from computer to backyard like a zombie.

(note added later, a fellow Adelaidean up in the hills saw it, blast. Tommorow night I go down to the beach) 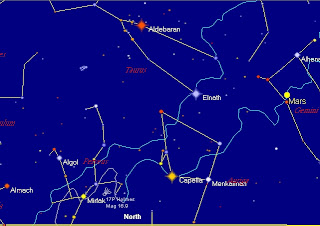 This image shows the location of comet 17P/Holmes looking at 2:00 am as seen from Sydney. Similar views will be seen from other locations north of Victoria. Click on the image to enlarge it.

A printable map in PDF format can be downloaded here.

Northern hemisphere corespondents say that it is quite star like, but it does not twinkle. As of around 11am AEST this morning the comets magnitude was quite bright, around 2.0. It's brightness has probably peaked. Whether it will fade before we can see it is unknown.

This image of the comet is from Sostero and Guido, this image is from Bernd Brinkman, and this animation is from Tony Farkas.

Comet 17P/Holmes has brightened enormously, and is now visible to the unaided eye. See Space weather for details, and here is a map.

I've set up a printable PDF file for the positions of comet LONEOS next week. Naturally it's from a Southern Hemisphere point of view.

The Moon and Mercury, from the past week. 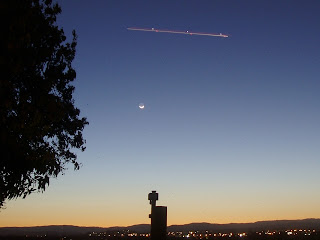 Mercury is below the crescent Moon in this image from last week, but you will have to click and enlarge the image to see it. The trail above the Moon is an aeroplane.

I didn't get to do much star gazing when I was in Queensland. The series of intense lightning storms that rolled in most of the nights we were there put a stop to that. Mind you, sitting watching great arcs of lightning slash across the sky was pretty entertaining. The occasional "Oh wow that's FANTASTIC" was heard to escape my lips.

Still I was able to see the crescent Moon and Mercury above the twilight hills. Not too shabby I say. 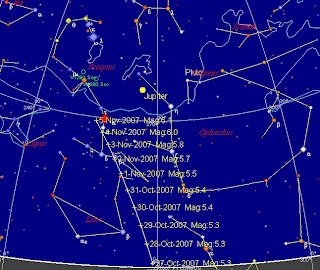 Path of comet LONEOS (C2007/F1) between 27 October and 5 November at civil twilight (half an hour after sunset). Click the image to enlarge to a usable size.

Comet LONEOS (C2007/F1) is a rapidly brightening comet that is currently visible only in the northern hemisphere, near Bootes. It is now visible to the unaided eye, and is brightening faster than expected. If it keeps following its current brightening curve, it may reach 4th or 3rd magnitude, brighter than the 5.3 magnitude maximum predicted (see here for an ephemeris).

Comet LONEOS enters the southern skies at the end of this week, however, it may be difficult to see in the twilight skies until the 28th or 29th, when it will be relatively low to the horizon. It won't be another comet McNaught, but it should be readily visible to the unaided eye and binoculars, even if it will only be a fuzzy dot. So pop out and have a look. I'll make some better charts later on.

Shelter from the Storm 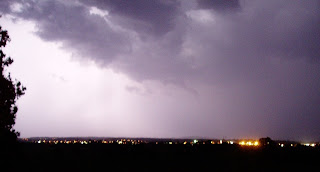 Well, I am finally back from my Secret Family Business (actually, I was back a few days ago, but running assessment tests, setting up exams and consulting with students filled up all the spare time both day and night...I've just finished reading a student essay before this post). Everybody is as hale and hearty under the circumstances as they could be, so we've come back in a positive frame of mind.

Even though I haven't lived in Queensland for over 20 years, every time I go there it is just like coming home. Sitting on my friends veranda, bathed in warm humid air, watching the lightning storms sweep over the landscape, listening to the geckos, it just reeked of topicality and it was as if I had never left.

Except for the geckos. Queensland did (and still does) have native geckos. But they were ill suited to the urban environment of Brisbane. I lived for 30 years next to a huge expanse of bushland, and I never once heard (nor saw) a native gecko (green tree frogs in the toilet, green tree snakes in the garden, but not geckos).

The geckos we were hearing, and seeing crawling up the wall, are invaders, Asian geckos. They arrived shortly before I left Queensland for southern climes, and have colonised the urban environment. They may possibly be a threat to the native geckos as well. It was a little disturbing that the "tropical" feel to Brisbane is now due to alien invaders.

Talk amongst yourselves (once again)

Family affairs mean that I can't post for a while, see you in a week and a bit.

Carnival of Space 23 is launched over at Advanced Nanotechnology. This issue leads with the 50th anniversary of Sputnik, then progress to pigs on Mars, hypersonic aricraft, a cracker post on habitable planets and how we colour space images. Catch it on the next orbit!

I remember well the landing on the Moon, all the kids at school were taken to the assembly hall and we watch the astronauts jump around in jerky black and white, but where were you when Sputnik was launched? Today is the 50th anniversary of Sputniks ascent into orbit. This event was the start of the space race and the catalyst for the Moon landings I watched all those years later. Where was I? Probably asleep in my cot. I was one and a half at the time, Dad and Mum were finishing off the house they had built and just moved into. Their furniture was packing crates, and a photo of the time shows a chubby-legged me watching dad do some carpentry in the back yard.

Did mum or dad take notice of the tiny satellite? Dad was a news hound, and would have probably listened attentively to the radio, but probably said nothing. Mum, with a feisty toddler and expecting her second child, probably didn't take much notice. In my minds eye I can see them, dad sitting on a packing crate, listening to the news on the crackly radio, mum bathing me in the concrete wash trough, a momentous event in time observed in mundane circumstances.

Given the importance of Sputnik, there doesn't seem to be much going on the celebrate this event. Apparently 50 nanosatellites will be launched on the anniversary, but I haven't seen much else about. Tom has a good post on Sputnik, with some audio of the satellite transmissions.

Colours of the Harvest Moon 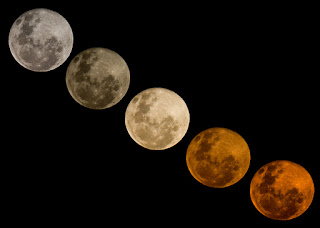 This fantastic photo by reader Tony Travaglia (Otago, New Zealand) is of the the Harvest moon on the 28th as it rose to the zenith. The changes in colouration of the as it traversed the sky are just beautiful