So is Gliese 581 c really a Venus like inferno? 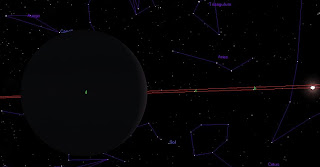 Gliese 581 system as simulated in Celestia

Remember Gliese 581c, the 1.5 Earth radii, 5 Earth mass planet that caused so much excitement? It was reported to orbit within the red dwarf Gliese 581’s Habitable Zone, making it the most Earth-like world yet found. The Habitable Zone of a star can be broadly defined as the zone where liquid water could exist on the surface of a planet. There is a lot more to habitability than just liquid water, but bear with me for a moment.

It is however obvious that the actual surface temperature of the planet very much depends on the highly uncertain composition and thickness of its atmosphere, which govern both the planetary albedo and the strength of the greenhouse effect. It is probable that the planet is located towards the “warm” edge of the habitable zone around the star

Now a group has done detailed calculations of the greenhouse effect for Gliese 581c and 581d (the 7.7 Earth mass planet further out). The international team of physicists, headed by Werner von Bloh of the Potsdam Institute for Climate Impact Research in Potsdam, Germany, found that with realistic levels of carbon dioxide in a number of different simulations, where they varied the ratio of ocean to continental mass from that of a rocky world to a water world, Gliese 581c came out as a hellish, Venus-like world (the paper is here).

This is not entirely surprising, even in the original Udrey paper, if Gliese 581c had an Earth-like albedo, reflecting 35% of the suns light back, its average temperature would be around +40ºC, not exactly comfortable. In terms of the luminosity of Gliese 581, which is 100 fold lower than Sol, Gliese 581c orbits in a location that is equivalent to being inside Venus’s orbit in our solar system.

However, when Bloh's team ran the simulations on Gliese 581d, the planet that orbits further out, they found that it was in the Habitable Zone. Gliese 581d is a larger world, and is also likely to be a water world. In the majority of the simulations the group ran Gliese 581d had liquid water and a reasonable temperature.

Now, when I say “realistic” CO2 atmosphere, they ran simulations with 5 and 10 bar of CO2 in the atmosphere. For comparison, Earth’s total atmospheric pressure is 1 bar, if Earth had a 10 Bar CO2 atmosphere, our surface temperature would be around 100ºC. How likely is it that Gliese 581d has a high pressure CO2 atmosphere. Being much larger than Earth, it would very likely have a lot more atmosphere. Since it is likely that Gliese 581d is a world that formed further out and migrated in to its current position, its atmosphere is probably going to be more like Neptune (at least when it starts out), which is mostly hydrogen, helium and about 3% methane. Methane is a more powerful greenhouse gas than carbon dioxide, but with Gliese 581d so close to its Sun, the methane will have probably broken down and they hydrogen largely lost. So over pressure CO2 atmospheres may not be entirely plausible for this world. Then again, there is Titan, with a thick nitrogen atmosphere, so post migration evolution of the Gleise 581d atmosphere may have enriched it with carbon dioxide.

A thick atmosphere also makes it likely that even though Gliese 581d is tidally locked, the atmosphere will redistribute heat effectively, and the atmosphere not “freeze out” on the night side. So Gliese 581d is likely to be a water world, with a thick atmosphere of some sort, probably with titan-like hydrocarbon clouds as a source of organics at least early in its evolution. This makes it a possible candidate for the evolution of life (provided you don’t need an interaction between shallow seas and continental masses for life to evolve). Life on a water world with a dense atmosphere and rather high gravity would be somewhat challenged, and probably wouldn’t get more advanced than bacteria, but we can at least speculate that on this world, the global ocean might be teaming with ... something.

The Gliese 581 system provides us with much food for thought, if the new generations of telescopes can detect the light from these worlds, who knows what we may find?

Venus, the Beehive, and the celestial hockey stick
Comet Crash!
Just one of those weekends
Grazing occulation movie
Venus and the Beehive, Vesta and Mars.
Speaking of Transits
No transits for Gliese 581
It's ASMR Medical Research Week!
June Southern Skywatch Now Up!
Sunspot 960 putting on a show