From now until roughly January 27 will be a good time to view Uranus.  Although Uranus is bright enough to be (just) visible to the naked eye at magnitude 5.7, finding it can be quite difficult. Over the next few days we have a very bright signpost, Mars, to guide us. Between now and Wednesday 27 January Mars will be within binocular distance of Uranus. On the 21st, Uranus will be between Mars and the Moon, and within a wide field telescope objective field of view from Mars. With a telescope you should see Uranus as a tiny disk.

During this time Uranus is the brightest object aside from the star 19 Arietis (which is approximately as bright as Uranus) in the constellation of Aires, the Ram) and of course the Moon, within binocular  range of Mars, but Uranus is easily distinguished as it is above Mars. 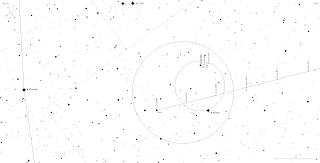 Binocular Spotter map suitable for printing (click it to embiggen and print) shows the nights Mars is within binocular range of Uranus (the large circle is the field of view of 10x50 binoculars the small the field of view of a 30mm telescope lens). Use the chart with a red light (or a torch with red cellophane over the end) so as not to interrupt your night vision.

The 21st is also the night of the apogee First Quarter moon, so you might like to try your hand at imaging Mars and Uranus.