The  Last Quarter Moon is Friday, January 17. Venus is prominent in the evening sky visible well after twilight. Mars is visible in the morning twilight in the head of Scorpius the Scorpion close to some bright stars. On the 21st the crescent Moon, Mars and the bright red star Antares form a line. On the 23rd the crescent Moon and Jupiter are close. The Red Giant star Betelgeuse in Orion is still dimming. 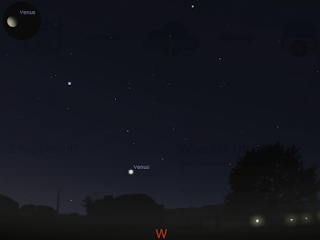 Sky at 21:35 ACDST on Saturday, January 18 (60 minutes after sunset) looking west as seen from Adelaide. Venus is prominent in the sky. The inset shows the telescopic view at this time. 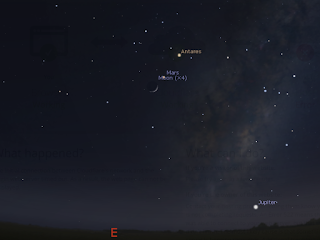 Morning sky at 5:20 ACDST facing east as seen from Adelaide on Tuesday, January 21, 60 minutes before sunrise.

Mars is now well above the horizon and is close to the body of Scorpius the scorpion. Mars is coming close to the bright red star Antares (the rival of Mars). On the 21st the crescent Moon, Mars and Antares form a line. 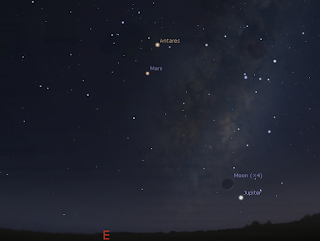 Morning sky at 5:22 ACDST facing east as seen from Adelaide on Thursday, January 23, 60 minutes before sunrise.

Jupiter is low above the horizon underneath the tail of Scorpius the scorpion. On the 23rd the thin crescent Moon is near Jupiter. 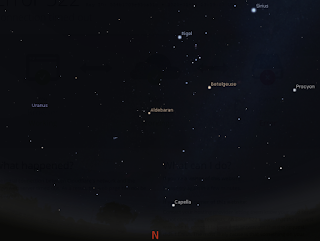 Evening sky looking north-east at 22:12 ACDST on Saturday, January 18 (90 minutes after sunset). Similar views will be seen elsewhere in Australia at the equivalent local time. Orion is readily visible. Betelgeuse is the bright red star below the "saucepan" of Orion. Red Aldebaran is almost the same height above the horizon as red Betelgeuse, making brightness comparisons easy.

Betelgeuse has dimmed substantially and is now even dimmer than last week, reportedly between magnitude 1.5-1.7, it is visibly dimmer than magnitude 1 Aldebaran and roughly as bright as Bellatrix. The next brightest star just to the north of Betelgeuse. Keep an eye on this historic dimming event, observing hints and stars for magnitude estimation are given here. The waning moon will be out of the way making it easier to estimate Belegeuses brightness.

Mercury is obscure in the twilight.

Jupiter enters the morning sky and is close to the crescent Moon on the 23rd low in the twilight.

Mars is visible high in the morning twilight. It is near the scorpion, Scorpius, this week. It is close to the bright red star Antares (the rival of Mars). On the 21st the crescent Moon, Mars and Antares form a line.