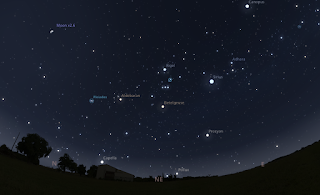 Evening sky looking north-east at 22:18 ACDST on Saturday, January 4 (90 minutes after sunset). Similar views will be seen elsewhere in Australia at the equivalent local time. Orion is readily visible. Betelgeuse is the bright red star below the "saucepan" of Orion. Red Aldebaran is almost the same height above the horizon as red Betelgeuse, making brightness comparisons easy

Betelgeuse is a red giant star which forms a distinctive part of the Constellation of Orion the Hunter. It has shot to prominence recently as it has dimmed to levels not seen for over 25 years. It is now obviously dimmer than magnitude 0.85 Aldebaran and roughly as bright as Bellatrix, the next brightest star just to the north of Betelgeuse (see chart below). While there is a lot of excitement as Betelgeuse is likely to go supernova "soon", soon is probably 100,000 years away, and the current dimming has other explanations (see below).

While familiar to almost all casual observers of the night sky as the bright red star that forms the shoulder of Orion the hunter, most people were unaware until recently that Betelgeuse is a variable star with a complex cycle of dimming and brightening. While the variations in brightness are small they may form the basis of stories by indigenous Australians who were keen observers of nature.

Recent light curve of Betelgeuse from the light curve generator at the AAVSO.  It's a bit messy because of all the observations, but you can see that it has now dipped to around magnitude 1.7 in the latest observations.

As I said, the variability of Betelgeuse is complex, with a dominant period of 420 days, superimposed on a long period of 5-6 years and a shorter-term variability of around 180 days. The latest Astronomers telegram suggests that the "he current faintness of Betelgeuse appears to arise from the coincidence of the star being near the minimum light of the ~5.9-yr light-cycle as well as near, the deeper than usual, minimum of the ~425-d period".

It is possible that Betelgeuse is close to its minimum, so further observations are needed over the coming days. Towards the end of the week, the waxing moon will make it more difficult to estimate Belegeuses brightness. 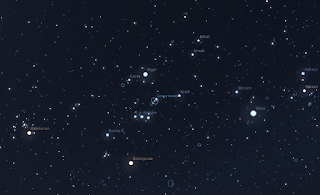 In order to avoid the Purkinje effect, where red stars seem to become brighter the longer you stare at them, you need to keep shifting your gaze around. Try bracketing the star with observations of stars brighter and dimmer. to get a good comparison. A more comprehensive guide to observing variable stars is here. Different observers will have slightly different estimates. My last estimate was Betelguese was a trace under 1.6 and Les Dalrymple had it a trace over. Try not to let your expectations bias what you are seeing.

Comments:
I have observed Betelgeuse last nights here from Brazil and, yes, I had never seen it so dim. It's kinda strage beacause all my life I have spotted stars in the sky and Betelgeuse have been a reference point. I wonder how long and how faint it will get.

It is still dim, it may have plateaued now, and might get brighter in the next week , bit it might start fading again