The First Quarter Moon is Monday June 10. Mars is visible low in the evening twilight with Mercury below it. Jupiter is easily visible in the evening skies and is at opposition, when it is biggest and brightest as seen from Earth, on the 11th. Saturn climbs higher in the late evening skies.  The morning skies feature three bright planets Jupiter, Saturn and bright Venus. Venus is closing in on the horizon.

The First Quarter Moon is Monday June 10. The Moon is at perigee, when it is closest to the Earth, on June 10. 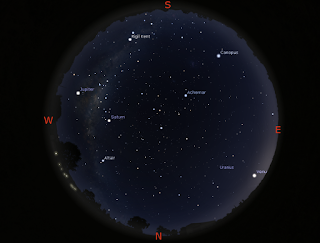 Morning  sky on Saturday, June 8  as seen from Adelaide at 6:19 ACST (60 minutes before sunrise).  Three bright planets can be seen. Jupiter and Saturn are above the western and north-western horizon. Venus is low above the eastern horizon.

Similar views will be seen elsewhere in Australia at the equivalent local time (60 minutes before sunrise, click to embiggen). 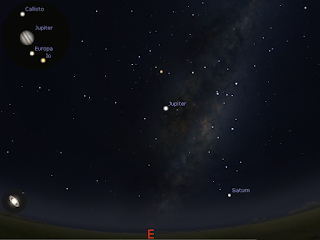 Sky at 20:00 ACST on Tuesday, June 11 looking east as seen from Adelaide. Jupiter is at opposition, and high above the eastern horizon with Saturn below. The left upper insert inset shows the telescopic view of Jupiter at this time, the left lower insert that of Saturn. 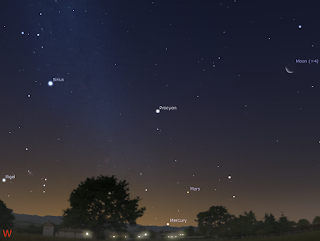 Evening sky on Saturday, June 8  as seen looking north-west from Adelaide at 17:55 ACST (45 minutes after sunset). Mars is in the constellation of Gemini, Mercury is just above the horizon.


Similar views will be seen throughout Australia at the equivalent local time (45 minutes after sunset, click to embiggen).


Venus is still bright in the morning twilight although it is coming closer to the horizon.

Mercury  climbs higher in the evening twilight, heading towards Mars, but is still best seen with a level, clear horizon.

Jupiter  Jupiter is at opposition, when it is biggest and brightest as seen from Earth, on the 11th. it is visible al night long and is a good telescope target in the evening, being highest above the northern horizon around midnight. Amateurs with medium to large telescopes may want to monitor the "unravelling" of Jupiter's red spot. Although opposition is on the 11th, Jupiter will be bright and big in telescopes for many week to come.

Mars is in Gemini. Mars heads towards Wasat, delta Geminorum during the week. Mars sets around 7:00pm.