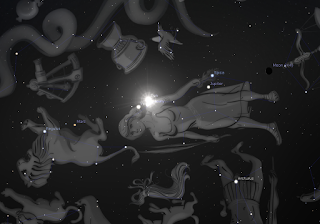 The great sign appearing in the sky in September, This once in 7,000 year celestial event shows "a woman clothed with the sun, with the moon under her feet, and on her head a crown of 12 stars. She was with child and wailed aloud in pain as she labored to give birth … She gave birth to a son, a male child, destined to rule all the nations with an iron rod", the beginning of tribulations described in Revelations 12...

Well, September 23, the date, according to numerologist David Meade, of the great sign of Revelation 12, where the spiritual beginnings of the apocalypse will occur, to be followed up by the impact of the imaginary Planet Nibiru on or Earth, has come and gone. 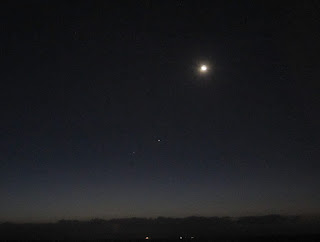 The crescent Moon, Jupiter and Spica on the evening of September 23, 2017 (click to embiggen)

So, what happened, we had the Solstice (spring in the Southern Hemisphere, Autumn in the North), a  very nice day here, warn and blue skied, and  nice evening line-up of Spica, Jupiter and the Moon (which will still be nice tonight), although the Moon will be further away.

And that was it. Nibiru failed to appear.   David Meade has suspended the apocalypse until some unspecified date in the future.

Assuming that we can trust the interpretation of the "woman clothed with the sun" as being the astrological constellation of Virgo when the suns is in it, the occurs EVERY September. The Moon will be at Virgo's feet at least once every september too. Jupiter, which is supposed to be the "male child" in the prophecy, is currently in Virgo not far from Spica, and will move out of Virgo over the coming Months (the "giving birth" thing). Jupiter have an orbit of roughly 12 years, so reoughly every 12 years of so we will have a  woman clothed with the sun, with the moon under her feet, giving bith to a child. Hardly the 7,000 year unqiue line up.

WHat about the crown of 12 stars, This si particularly arbitray (there are any number of stars above the "Head" of Virgo). There are 13 unaided eye visible stars in Leo, and you can add in the planets as well. Theses line-ups with the added Planets are rarer, EarthSky found at least 4 others in 1827, 1483, 1293, and 1056. I've illustrated the 1827 one above.

Notably, the world did not end after the 1827 Revelation sign, despite months and years passing. The same will happen with this revelation sign.

What about Nibiru. It is a figment of the imagination. In the same peoid that this supposed bigger than Jupiter palent was supposed to come close to us, amateur and professional astronomers tracked a tiny space probe, found a new Dwarf Planet, multiple new asteroids and generally failed to see anything as obvious as a mega Jupiter heading towards us (it would be the brightest object in the sky, other than the Sun and Moon, for many months before it came close to us, even if it was pitch black).

Because it isn't there.

So next time someone tries to scare you with an astronomical doomsday, just say no. You've survived at least four, you are not scared any more.

Comments:
Hi Ian, thanks for the post. Have you ever done a post about telescope basics for beginners? I'd like to get a telescope but I'm a bit lost as to what I should be looking for.