The Full Moon is Saturday February 11, it occults the bright star Regulus at this time.  Venus is prominent in the twilight and early evening sky in the star poor regions of Pisces. Mars is just above Venus. Jupiter and the bright star Spica are close in the late evening skies. Saturn is high in the morning sky with Mercury close to the horizon below. Comet 45P may be visible in binoculars. 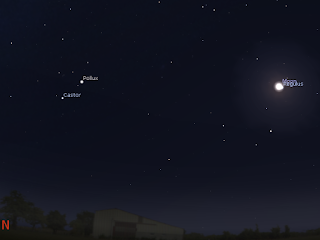 The Full Moon is Saturday February 11, it occults the bright star Regulus at this time.

The North-eastern horizon as seen from Adelaide at 23:00 ACDST, the bright star Regulus is close to the Moon just before it is occuted. Similar views will be seen elswhere in Australia at the equivalent local time. Click to embiggen.

On the late evening of Saturday 11 February the bright star Regulus is occulted by the Moon as seen from the most of Australia. This is the first of two occultations of Regulus, the brightest star in the constellation of Leo the lion, this year. The Moon is a very obvious signpost for where to look and Regulus will be the brightest object near the Moon. Further details, viewing hints and timings for major cities can be found here. 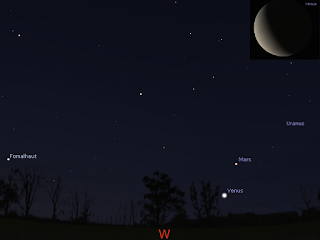 Evening sky on Saturday February 11 looking west as seen from Adelaide at 21:17 ACDST (60 minutes after sunset). Venus and (now dim) Mars form a line. The inset shows the telescopic view of Venus at this time.

Venus is in a very star poor field in Pisces. Venus is a distinct "waning Moon" shape in telescopes.

Mars is in the western evening skies in  Pisces. Mars remains in a star poor area. 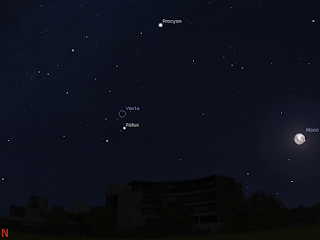 
The asteroid Vesta is just past opposition, and this is a excellent time to see one of the biggest asteroids in the solar system. At magnitude 6.8 it is easily viewable in binoculars. It is above the north-eastern horizon, and the bright stars of Gemini, Castor and Pollux, form a triangle with it. Over the next few nights it will be between to kappa (𝛋) Geminorium and upsilon (𝜐) Geminorium making Vesta very easy of find. Kappa (𝛋) Geminorium is the next brightest star in almost a line with Castor and Pollux, which makes it a easy telescopic signpost. You may need to watch night to night as the asteroid moves to be sure of its identity. For more details and a printable map see this page. 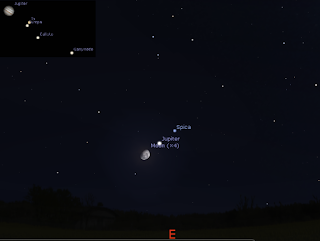 Sky on Wednesday February 15 looking east as seen from Adelaide at midnight ACDST.  Jupiter is now rising before midnight. It is close to the bright star Spica and the waning Moon. The inset shows the telescopic view of Jupiter at this time. Similar views will be seen elsewhere in Australia at the equivalent local time. (click to embiggen).

Jupiter rises even  higher into the morning skies this week. It is now well above the eastern horizon and is easy to see as the brightest object above the northern horizon from around an hour and a half before sunrise. It is also riging just before midnight, but remains low to the horizon this week. It is close to the bright star Spica, the brightest star in the constellation of Virgo. Jupiter is a good telescopic target from around 1 am, and the dance of its Moons is visible even in binoculars. The following Jupiter events are in AEDST. 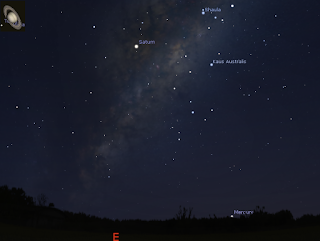 Morning  sky on Saturday February 4 looking east as seen from Adelaide at 5:33 ACDST (60 minutes before sunrise). Saturn is reasonably high above the horizon with Mercury just below it . The inset shows the telescopic view of Saturn at this time. Similar views will be seen elsewhere in Australia at the equivalent local time (60 minutes before sunrise). (click to embiggen).

The constellation of Scorpio is a good guide to locating Saturn and Mercury. The distinctive curl of Scorpio is easy to see above the eastern horizon, locate the bright red star, Antares, and the look below that towards the horizon, the next bright object is Saturn, followed by Mercury.

Mercury is slowly returning towards the horizon, this week is the last that it will be easily visible, by the end of the week it will be lost in the twilight. 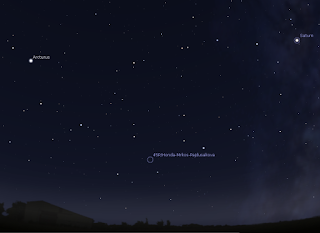 Comet 45P on February 11 facing north-east at astronomical twilight in the morning as seen for most of Australia. Click to embiggen.

Comet 45P is around magnitude 6.5 and is visible in binoculars and small telescopes in the early morning sky.  It is currently showing as a small fuzzy patch with no hint of a tail.

On February 11 the comet will be closest to Earth and the comet may be seen to move visibly during the morning skies.