Seeing the Opposition of Vesta in Binoculars (January 2017)


Tonight is the opposition of the asteroid Vesta. Remember, an opposition is any time we are directly between an astronomical object and the Earth. Oppositions of Mars and Jupiter can be spectacular, but even humble chunks of rock can have oppositions. We generally don’t notice them, because they are invisible to the unaided eye.

Vesta is unusual in that sometimes it reaches unaided eye visibility, although this year is is just on the threshold  for only a couple of days.  Vesta is visible from astronomical twilight (an hour and a half after sunset, when the sky is fully dark) until early morning and is highest just after midnight.

Currently around magnitude 6.2, it is readily visible in binoculars. Theoretically, someone with very good eyesight under dark skies away from the city could (just see it).

Vesta is relatively easy to find. It is above the north-eastern horizon at astronomical twilight, and nearly due north at midnight. The bright stars of Gemini, Castor and Pollux, point to it, with Vesta being almost the distance between Castor and Pollux from Pollux (see charts, sweep your binoculars up from Castor to Pollux and around a binocular width beyond Pollux). You may need to watch night to night as the asteroid moves to be sure of its identity. 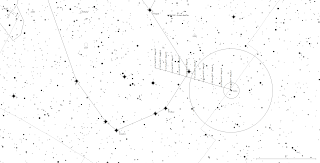 Black and white binocular chart suitable for printing (click to embiggen and print). The large circle represents the field of view of 10x50 binoculars. The small that of a 4" Newtonian telescope with a 24 mm eyepiece.