The Last Quarter Moon is Sunday February 19.  Venus is prominent in the twilight sky in the star poor regions of Pisces. Mars is just above Venus. Jupiter and the bright star Spica are close in the late evening skies. Saturn is high in the morning sky and is close to the crescent Moon on the 21st..

The Last Quarter Moon is Sunday February 19. The Moon is at apogee (when it is furthest from the Earth) at this time. 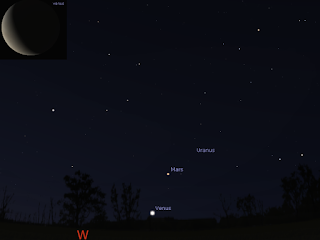 Evening sky on Saturday February 18 looking west as seen from Adelaide at 21:09 ACDST (60 minutes after sunset). Venus and (now dim) Mars form a line. The inset shows the telescopic view of Venus at this time.

Venus  is high in the dusk sky and intensely bright. After being a feature of the evening sky for so long, it is now rapidly heading towards the horizon.

Venus is in a very star poor field in Pisces and is a distinct crescent shape in telescopes.

Mars is in the western evening skies in  Pisces. Mars remains in a star poor area. 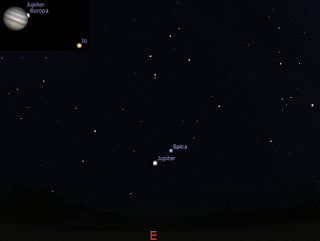 Sky on Saturday February 18 looking east as seen from Adelaide at 23:30 ACDST.  Jupiter is now rising before midnight. It is close to the bright star Spica. The inset shows the telescopic view of Jupiter at 2:32 am as Erupa appears from behind Jupiter. Similar views will be seen elsewhere in Australia at the equivalent local time. (click to embiggen).

Jupiter is rising just before midnight, but remains low to the horizon this week and is still better in the early morning. It is close to the bright star Spica, the brightest star in the constellation of Virgo. Jupiter is a good telescopic target from around 1 am, and the dance of its Moons is visible even in binoculars. The following Jupiter events are in AEDST. 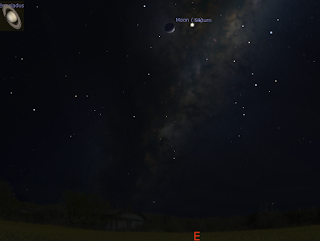 Morning  sky on Tuesday February 21 looking east as seen from Adelaide at 5:17 ACDST (90 minutes before sunrise). Saturn is reasonably high above the horizon and close to the Moon. The inset shows the telescopic view of Saturn at this time. Similar views will be seen elsewhere in Australia at the equivalent local time (90 minutes before sunrise). (click to embiggen).

The constellation of Scorpio is a good guide to locating Saturn. The distinctive curl of Scorpio is easy to see above the eastern horizon, locate the bright red star, Antares, and the look below that towards the horizon, the next bright object is Saturn. The crescent Moon is close to Saturn on Tuesday February 21.