This is a good year, while the peak occurs before the radiant rises (or at least is at its closest to the horizon) in Australia, it still occurs reasonably close to radiant rise and there is no Moon to ruin the shower. Also this years peak is higher than usual (with a ZHR of 150 meteors per hour predicted). 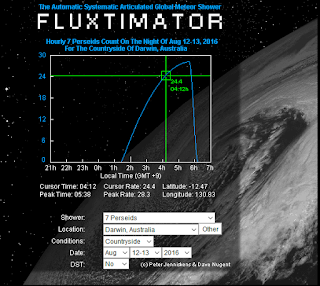 Comments:
Thanks very much for the information and viewing hints! Much appreciated,
Cheers, Jo

Astrophiz Podcast 5 is Out
A Kreutz Comet Meets its Doom
Venus, Mercury and Jupiter in the Twilight (3 Augu...
Aurora Visible NOW (August 3, 2016)
The Sky This Week - Thursday August 4 to Thursday ...
Southern Skywatch August, 2016 edition is now out!
A Rare Planet Dance in August 2016
Astrophiz Podcast 4 is Out
Southern Delta Aquariid Meteor Shower 29-31 July, ...
The Sky This Week - Thursday July 28 to Thursday A...