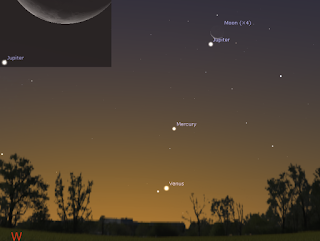 Evening sky on August 6 looking west as seen from Adelaide at 45 minutes after sunset.  Similar views will be seen throughout Australia at equivalent local times. (click to embiggen).

The August edition of Southern Skywatch is  up.

This month sees all five bright planets in the evening sky and  still more nice planetary action. The Perseid meteor shower is visible in northern Australia on the 13th.

Jupiter is very close to the waxing crescent Moon on the 6th.

Mars the Moon, Antares and Saturn form a diamond in the sky on the 12th. Mars passes between Antares and the Moon on the 24th

Saturn has a close encounter with the Moon on the 12th.

Venus climbs higher the evening twilight and is extremely close to Jupiter on the 28th.

Mercury, forms a line-up with Venus and Jupiter, and is close to the pair on the 28th.