The First Quarter Moon is Friday July 24. Venus is brilliant in the twilight evening sky with bright Jupiter below it. Comet C/2014 Q1 PanSTARRS is visible in binoculars near them.  Saturn is in the head of the Scorpion and is easily visible in the evening. The Moon is close to Saturn on the 26th 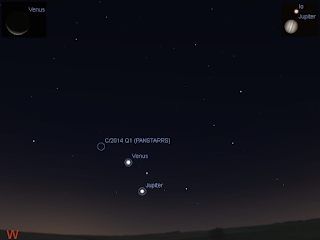 Early evening sky on Saturday July 25 looking north-west as seen from Adelaide at 18:30 ACST showing Venus,the star Regulus and  Jupiter forming a triangle. Comet C/2012 Q1 PanSTARRS is visible in binoculars nearby. The inset shows the binocular view of the two at this time.

Venus is still easy to see above the western horizon in the twilight. At nautical twilight, an hour after sunset, it is around three hand-spans above the horizon, and still visible at astronomical twilight. Venus is a distinct thin crescent shape in even small telescopes.

Venus and the bright star Regulus are close, with Jupiter below making a triangle in the sky. 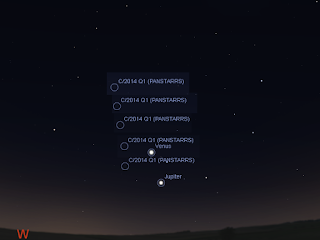 
Comet C/2014 Q1 PanSTARRS is now visible in the evening low in the twilight. It is sporting a nice double tail http://apod.nasa.gov/apod/ap150721.html. If you try looking an hour after sunset you will see it very low above the horizon. It is only visible in binoculars or a telescope, however, it looks quite good as a fuzzy ball of light in binoculars. At the beginning of the week sweeping west of Venus and Jupiter by about a binocular field should bring you to the comet (there are no other bright fuzzy blobs about).

As the week progresses, the comet rides higher in the sky so you will need to sweep up from Venus (see diagram above), but the comet also dims and increasing Moonlight will make it harder to find.


Jupiter  is easily seen  in the early evening sky below Venus in the north-western sky. It is also near the bright star Regulus in Leo. Jupiter and Venus  move further apart as the week goes on while Jupiter moves closer to Regulus.

Jupiter is visible in the early evening, setting just before 7:30 pm. It is high enough for telescopic observation once twilight is over, and there is a very narrow window of about an hour before it is too close to the horizon for telescopic viewing. Jupiter's Moons will be putting on a good display in both binoculars and small telescopes. 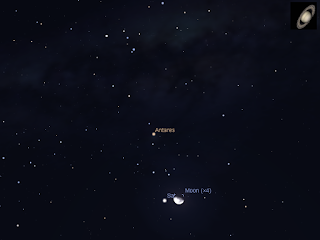 Evening sky on Sunday July 26 looking at the zenith while facing west as seen from Adelaide at 22:00 ACST.  Saturn is  easily visible high above the western horizon near the zenith near the head of the Scorpion. The inset shows the telescopic view of Saturn at this time. Similar views will be seen elsewhere in Australia at the equivalent local time. (click to embiggen).