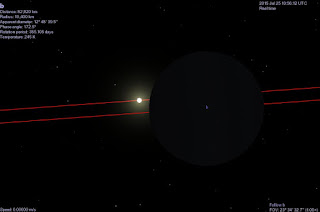 Kepler-452b and Kepler-452 simulated in Celestia (click to embiggen).

Friday's announcement from the Kepler mission of the discovery of Kepler 452b had the media galvanised, with some calling it "Earth 2.0".

Kepler 452b is earth-like, and in a habitable zone, but that doesn't meant that it is Earth's twin. Similarly, not being Earth's twin does not make it disappointing.

Kepler-452b is in the habitable zone of it's star, with a radius 1.6 times that of Earth (technically making it a super Earth). While there is a lot of to-do about habitable zones, it simply means the zone where liquid water can exists on a planets  surface. Other factors may be involved in habitability too. Mars is in our habitable zone, but was too small to hold on to a substantial atmosphere, and is now a freezing desert.

As of this discovery there are 13 earth-like worlds orbiting stars in their habitable zomes, and Kepler-186f is one that is closer in size to Earth than Kepler 452b. However, all but Kepler-452b orbit smaller, cooler stars and most are tidally locked to their sun (Kepler-186f orbits roughly where Mercury would be in our solar system, but because its sun is a cool red dwarf, it is not baking hot).

We don't know if Kepler-452b is a rocky world like our own, or a water world, however, it is the first time we have found an earth-like world around a sun that is the near twin of our own. Technically, it is quite difficult for find these kinds of planets (finding planets that have short years around dim cool stars is much easier) and gives us hope that we can find more of them in the near future.

Once again I've made Celestia files for the system. One for the star (which isn't in the default files) and one for the planet.

As usual, copy the data here to plain text files (Kepler452.stc and Kepler452b.ssc), copy both of the files to the Celestia extras folder. The star is around 1400 lightyears away in Cygnus, so in the Celestia star browser, you will have to show around 500 stars to see Kepler-452 in the list. You can find the paper from which I took the data here.

Comments:
Exciting stuff! I just made a blog post about this myself. From what I can tell, Kepler-452 is too far away to follow up with radial velocity measurements to help constrain the mass of Kepler-452b. I believe the planet's mass was calculated by modeling, right?