The First Quarter Moon is Tuesday January 27. Venus is prominent in the twilight evening sky while Mercury falls back to the horizon. The pair are visited by the Moon on Jan 22. Mars is just visible in the early evening and is visited by the Moon on Jan 23. Jupiter is visible in the late evening sky. Comet C/2102 Q2 Lovejoy is lost from view. Saturn is in the head of the Scorpion. 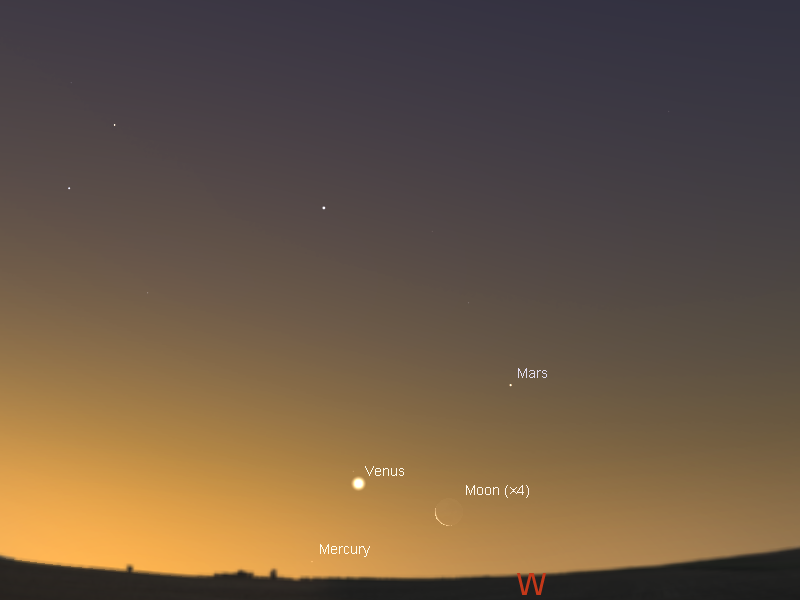 Evening sky on Thursday January 22 looking west as seen from Adelaide at 21:00 (9:00 pm) ACDST in South Australia.  Mars is low in the twilight, with Venus and the Moon close together below. Mercury is deep in the twilight. Similar views will be seen elsewhere at the equivalent local time (click to embiggen).

Mercury  is low in the twilight, and by the end of the week will be too hard to see. Venus provides a helpful signpost to finding Mercury which is below and to the left of Venus. On the 22nd Venus, the thin crescent Moon and Mercury form a triangle, although you may need binoculars to see Mercury. You will need a reasonably flat, clear horizon to see it.

Venus is now easy to see low on the western horizon in the twilight. At civil twilight, half an hour after sunset, it is well over a hand-span above the horizon. While Venus is bright you will still need a reasonably flat, clear horizon to see it, although as the week goes by it is easier and easier to pick out. On the 22nd Venus, the thin crescent Moon and Mercury form a triangle.

Mars  is still seen low in the western evening sky, setting before 10:30 pm daylight saving time (shortly after twilight ends). Mars is becoming harder and harder to see as it lowers deeper into the twilight. On the 23rd the crescent Moon is close to Mars. 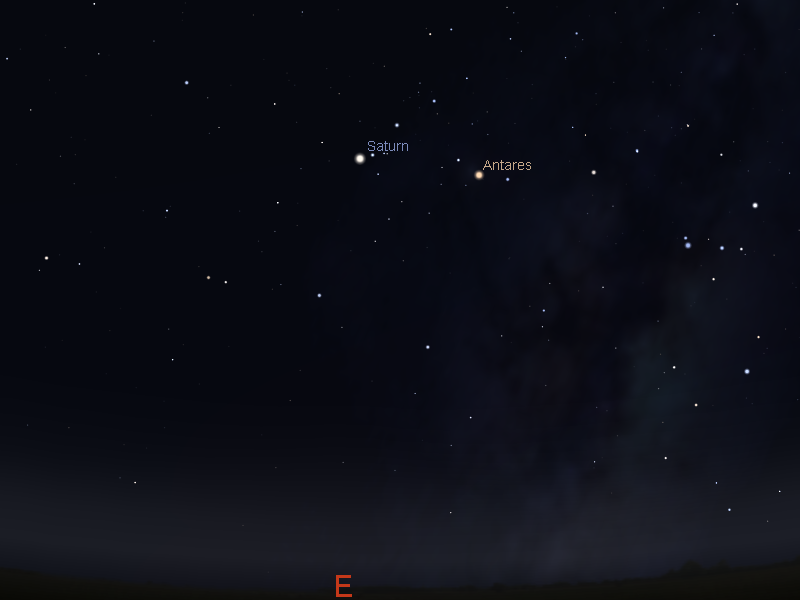 Morning sky on Saturday January 24 looking east as seen from Adelaide at 5:00 am ACDST .   Saturn is in the head of the Scorpion, not far from Antares at this time. (click to embiggen).

Jupiter  is prominent in the morning sky, and is easy to see as the brightest object above the northern horizon before twilight. It is now not far from the bright star Regulus in the sickle of Leo (this forms the head of the constellation of the  Lion).

Jupiter is high enough for good telescopic observation before astronomical twilight. Jupiter's Moons will be putting on a good display in both binoculars and small telescopes.

Jupiter enters the evening sky just before 10 pm daylight saving time, where it is the brightest object above the north-eastern horizon. It is now in a decent position for telescope viewing just before midnight, although still best in the early morning. 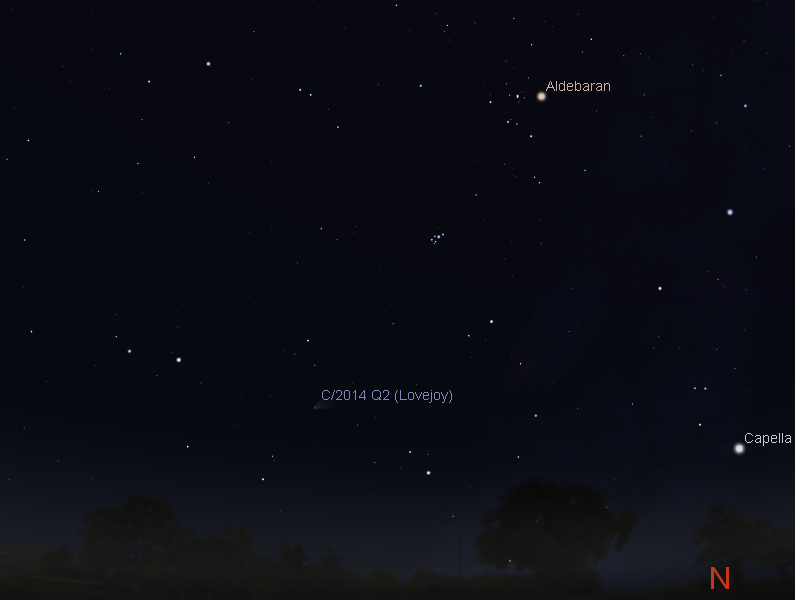 Evening sky on Sunday January 25 looking north  as seen from Adelaide at 22:00 (10:00 pm) ACDST in South Australia. Comet C/2014 Q2 Lovejoy is below the Pleiades.  Similar views will be seen elsewhere at the equivalent local time (click to embiggen).

C/2014 Q2 Lovejoy is dimming in the sky. This will be the least week we can effectively see the comet before it passes completely into northern hemisphere skies.

While the comet is reasonably bright now (estimates between magnitude 4.0 and 4.5) it is slowly fading as it heads towards the horizon where horizon murk makes it even harder to see. Also this week the Moon brightens compounding the comets visibility difficulties. It is still easily visible in binoculars but will be much more difficult to see by the weeks end. Binoculars or small telescopes show it as a definite fuzzy disk about a quarter of the size of the Moon. In modest sized telescopes the faint thin tail can be seen. Instructions on viewing the comet and printable finding charts can be found here.

There are lots of interesting things in the sky to view with a telescope. Especially with the comet in the early evening sky.  If you don't have a telescope, now is a good time to visit one of your local astronomical societies open nights or the local planetariums.