No, this coming Lunar Eclipse does NOT herald the End of Days 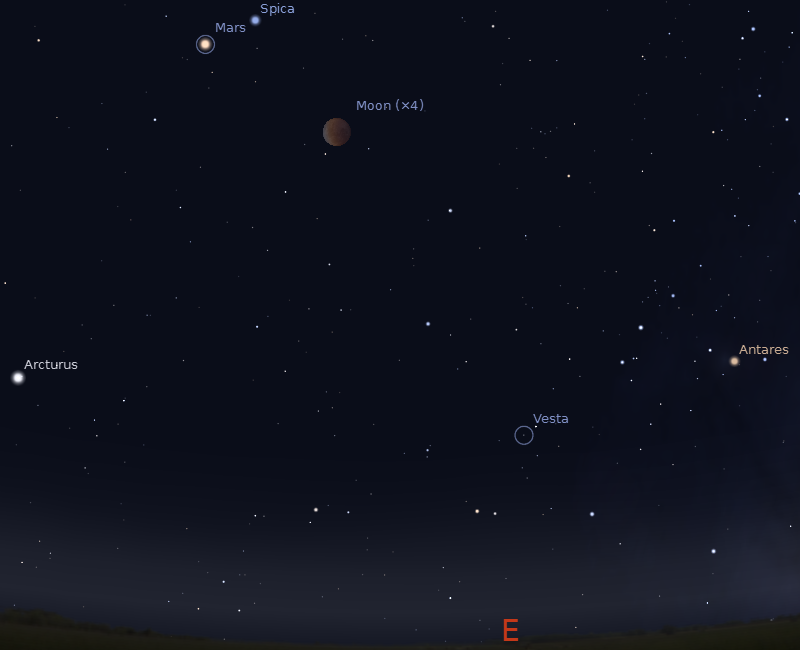 Predicting the End of the World (or some close approximation thereof) for astronomical events is a cottage industry that has been going on for millennia, the most recent include comet Elenin in 2011, of course the 2012 Mayan apocalypse and comet ISON in 2013 (although the doom does seem to be running out of steam lately).

Now it is Lunar Eclipses (really). If there wasn't enough real issues in the world today, Australian on-line news, the Courier Mail in Queensland, and the Mirror in the UK have been spruiking this "End of Days" nonsense which is linked to the upcoming eclipse.

This month we have a Total Lunar Eclipse coming after the opposition of Mars, in fact we will have four total eclipses of the Moon in 2014 and 2015. The Totally Eclipsed Moon is copper coloured, and Mars is red(ish), so it MUST MEAN SOMETHING!!!! Right.

Every year we have two Lunar Eclipses. To have a Lunar eclipse the Moon must cross Earth orbit when Earth is aligned with the Sun. This occurs twice a year, around 6 months apart (the drift of the timing of this occurrence means that sometimes there are more than two eclipses in a year).

While there are at least two Lunar Eclipses a year, not every year has two total eclipses, slight variations in the Earth-Moon geometry mean that sometimes we get partial eclipses, or the fainter penumbral eclipses, when the Moon passes through Earth outer shadow.

Now having four total eclipses in a row (a tetrad) is fairly rare, currently occurring every 10-20 years or so (it's more complicated than that of course). Note that world has not ended despite multiple instances of tetrads over the past few centuries. The last one was in 2003-2004 (note the world not ending) and prior to that in 1985-1986 (world failed to end again).

I'm not sure why the newspapers are promoting this nonsense, especially since there are lots of interesting things happening in the world to sell newspapers, and since the stories are full of nonsense which can be easily checked and seen to be wromg.


"NASA has confirmed that the Tetrad has only happened three times in more than 500 years — and that it’s going to happen now."

Anyway, you enjoy the Total Lunar  eclipse of April 15, knowing the End of Days is nowhere in sight.

Comments:
I blog about the End of the World and even I don't want to reprint this End of Day BS. It's being sold (and I do mean sold) as the End of Days by people wanting to exploit the religious and stupid to sell books or dvds or prophecies.

Great to find one more voice of reason out there on this one. I've already corrected examiner.com who said that a lunar tetrad hasn't occurred for hundreds of years.

Keep up the good work!

ooohhh - it's not the end of days, it's the start of wars! all those years, fudging a bit, heralded wars.

do i won a prize?

The "blood moon" theory is that 4 successive tetrads on important Jewish feast days (a rare ) occurrence) indicates significant events for Israel. In 1949 Israel was admitted to the UN, in 1967 there was the June war. The one before that (1490's) saw a significant movement of Jews returning to Palestine.