Diatoms From Outerspace? How Not to Find Life on Comets

By now most of you will have seen the breathless reports that claim alien life has been found in cometary debris collected by a high altitude balloon during the Perseid meteor shower. The facts however are far more mundane. 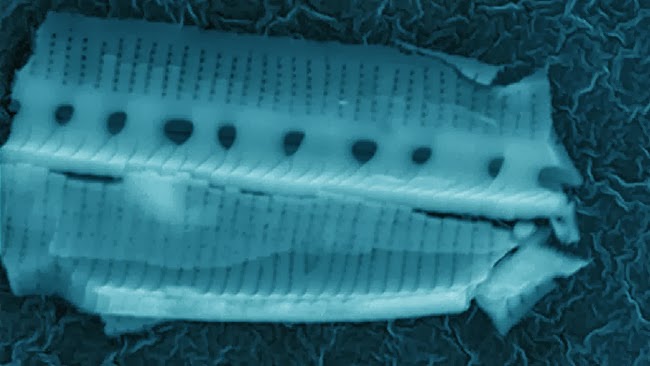 A fragment of diatom caught in the upper atmosphere by the sampling ballooon. Image Credit University of Sheffield.

You can see the actual research the news paper reports are based on  here. The summary in the conclusion of the paper is a bit less triumphal than the news reports


"To conclude we note that the results presented here provide unequivocal evidence that a diatom fragment has been found in the lower stratosphere."

Yes. That's the whole paper basically. "We found a diatom fragment, it's unlikely that diatom fragments can last that long in the high atmosphere, therefore it came from outer space"

Despite all the images of weird looking blobs in the newspapers they have one, count it, one, fragment of a diatom (a kind of algae with hard shells, they found a bit of the shell). No alien DNA, no other evidence except this one fragment (most of the pictures in the press reports aren't even of the actual diatom fragment, but random dust particles). The authors even admit it looks like a terrestrial diatom fragment.

The authors entire argument rests on it being unlikely that chunks of diatom can last in the stratosphere for a long time. Except it is not that unlikely. We know that diatoms are ubiquitous in atmospheric dusts, indeed the worlds largest source of atmospheric dust is diatomaceous earth, let alone marine and other surface water droplets. Contamination of forensic and other materials with extraneous diatoms is a perennial problem. So extreme caution is need when interpreting these sorts of results.

Diatomaceous dusts can travel long distances, from the Sahara to Great Britain, and diatom containing droplets can travel far and be wafted high up.

So high that Diatoms are thought to play important roles in forming nucleation centres for rain clouds. While the authors claim there is no known mechanism for getting big dust particles that high, the very ubiquity of diatomaceous dusts, their presence at high altitude in cloud formation, and the ability of cloud air currents to loft material high into the sky make it plausible that diatom fragments could be lofted high but turbulent air currents.

Another mechanism for getting diatoms high in the air is volcanic eruptions.  Despite authors claim that there were no volcanic eruptions before the balloon flight, the volcano Bata Tara in Indonesia has been exploding continuously since March, producing huge ash plumes).

Another issue relating to the contamination question is appropriate controls. While the authors had a good control for the ground based contamination of the sample cabinet, they did not do a control flight when there was no meteor shower, so we do not know if they would have picked up any diatom fragements in the absence of meteor dust.

Also, there is the question of WHY an algae that has evolved to live in marine or fresh water environments is on a comet in the first place, a frozen ball that spends most of its time far from the light of the sun is hardly the best place for things that photosynthesise in liquid water. Algae live in some very extreme environments, but spending your life frozen in a vacuum in the dark just doesn't make any sense algae wise.

The authors claims that comets have a "watery environment" is cause for head shaking, Comets are mixtures of ices (water, carbon dioxide, Carbon monoxide amongst others) which is normally frozen at the temperature below that of dry ice (frozen CO2), when the ices heat up during the comets fleeting visit to the Sun they don't go liquid, but sublimate. Hardly the best environment for a marine or river organism.

The Journal of Cosmology has form for publishing articles on life from outer space with very weak evidence. You can see my discussion of a previous paper from a different group claiming bacterial fossils in a meteorite here http://pandasthumb.org/archives/2011/03/life-from-beyon.html

Comets may have bought the building blocks of life to a primitive Earth billions of years ago, but  modern diatoms living on current comets? No.

You can see the Bad Astronomers sceptical take here, and the Conversation commentary here.

Earthquakes and Planetary Alignments, Yet Again.
Comet ISON is Not Adjusting its Orbit Around Mars,...
My Interview on Comet C/2012 S1 ISON
Carnival of Space #319 is Here!
Venus, Saturn and Mercury, 17 September 2013
The Sky This Week - Thursday September 19 to Thurs...
Comet C/2012 S1 ISON in Celestia
City to Bay 2013
Comet ISON, a FAQ for the Perplexed
Carnival of Space #318 is Here!