The New Moon is Wednesday August 7. Mars, Jupiter and Mercury form a line in the morning twilight. Mercury becomes lower in the morning sky. The crescent Moon visits Mars and Jupiter on the 4th and Mercury on the 5th. Venus is readily visible in the evening twilight and is heading towards the bright star Beta Virginis. Saturn is high in the western evening sky.

The New Moon is Wednesday August 7. The Moon is at Apogee on the 3rd. 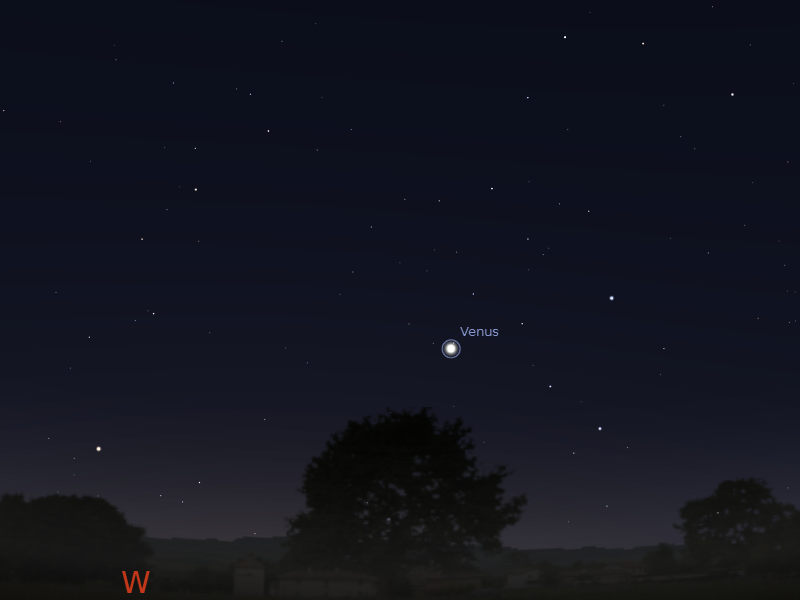 Evening sky looking west as seen from Adelaide at 18:30 pm local time on Saturday August 3. Venus is quite high in the evening sky heading for Beta Viriginis (out of frame at the top). Similar views will be seen elsewhere at the equivalent local times.  Click to embiggen.

Venus comes closer to heading for Beta Viriginis as it climbs higher in the sky.

Saturn is easily visible above the western horizon in the early evening in the constellation of Virgo. By 10 pm local time it is  above the western horizon and very easy to see. This is still an excellent time to view this planet in a small telescope, as there will be the little interference from horizon murk and air turbulence (and you can show the kids before they go to bed).

Opposition (when Saturn is biggest and brightest as seen from Earth) was on April 28. However, Saturn will be a worthwhile evening target for telescopes of any size for a while. The sight of this ringed world is always amazing. 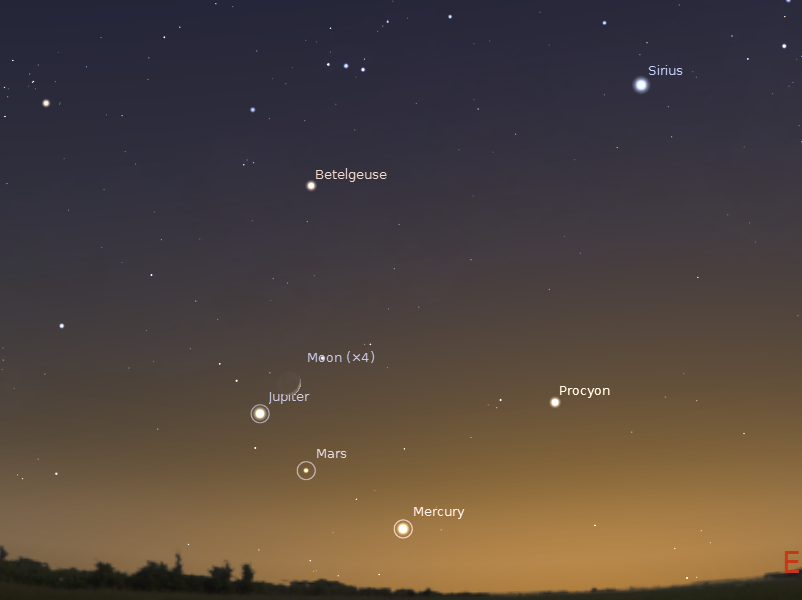 Morning sky on Sunday August 4 looking north-east as seen from Adelaide at 6:30 am local time in South Australia. Mars, Jupiter, and Mercury form a line in the morning sky, with the crescent Moon above Jupiter. Similar views will be seen elsewhere at the equivalent local time (click to embiggen).

Mars rises higher in the morning twilight. It forms a  a line with the bright stars Betelgeuse and Rigel.

Mars, Jupiter and Mercury start the week forming a line in the morning twilight.

Jupiter is now well above the north-eastern horizon, above Mars.  During the week Jupiter rises higher and continues to move away from Mars. On the 4th the crescent Moon is above Jupiter.

Mercury lowers in  the morning twilight this week. On the 5th the crescent Moon is above Mercury.

Cloudy Sundial
Venus from my new phone
Carnival of Space #311 is Here!
The Sky This Week - Thursday July 25 to Thursday A...
Having Pie on Pi Day
Happy 44th Anniversary Apollo 11 Moonlanding
Venus and Regulus, Mars and Jupiter Meet July 22
The First Images of Saturn and Earth are Here!
Waving at Planets (Saturn and Mercury) in the Rain.
Don't Forget To Wave at Saturn (and Mercury) this...