The Sky This Week - Thursday July 25 to Thursday August 1

The Last Quarter Moon is Tuesday July 30. Mars and Jupiter are close in the morning twilight. Mercury climbs higher in the morning sky and is highest on Tuesday. Venus is readily visible in the evening twilight and is near to the bright star Regulus. Saturn is high in the western evening sky. The Southern Delta Aquariid meteor shower peaks on Sunday 28 July. 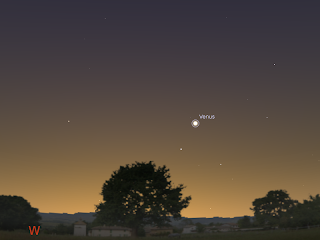 Evening sky looking west as seen from Adelaide at 18:00 pm local time on Saturday July 27. Venus is above the bright star Regulus. Similar views will be seen elsewhere at the equivalent local times.  Click to embiggen.

Venus starts the week just above the bright star Regulus. As the week goes on, Venus moves away from Regulus as it climbs higher in the sky.

Saturn is easily visible above the northern-western horizon in the early evening in the constellation of Virgo. By 10 pm local time it is moderately high above the western horizon and very easy to see. This is still an excellent time to view this planet in a small telescope, as there will be the little interference from horizon murk and air turbulence (and you can show the kids before they go to bed).

Opposition (when Saturn is biggest and brightest as seen from Earth) was on April 28. However, Saturn will be a worthwhile evening target for telescopes of any size for a while. The sight of this ringed world is always amazing. 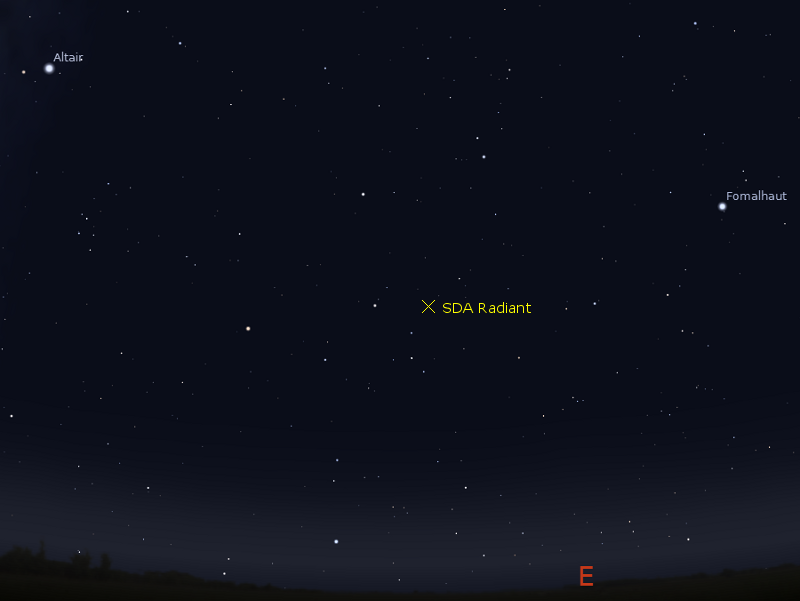 The Southern Delta-Aquarids meteor shower runs from from 12 July to 19th August, peaking on July the 28th. This shower is fairly faint, with the highest rate of around a meteor every 6 minutes.

At 10 pm, face east, and look 4 hand spans and two finger widths above the horizon. One finger width right is the 4th magnitude star delta Aquarii. The radiant is just above this star. This meteor shower should be visible from 10.00 pm until dawn, but after midnight the waxing Moon rises, interfering with viewing. 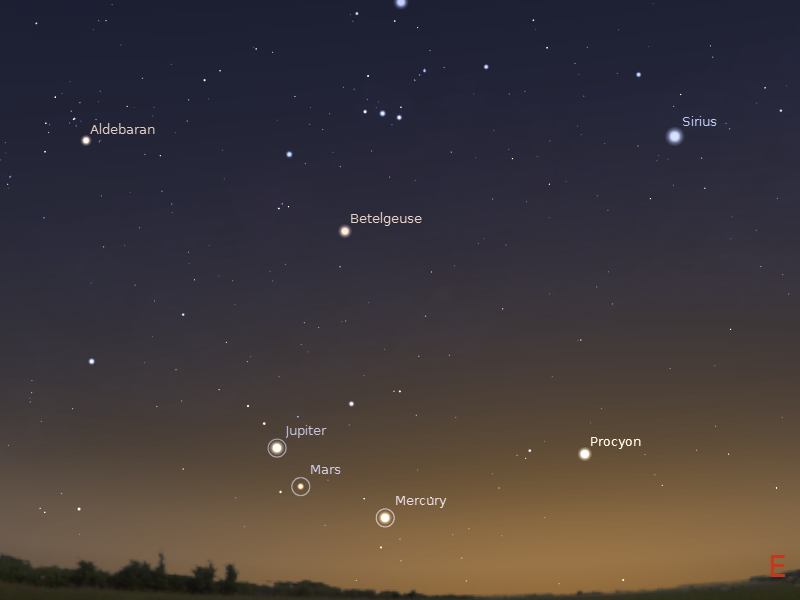 Morning sky on Tuesday July 30 looking north-east as seen from Adelaide at 6:30 am local time in South Australia. Mars is near  Jupiter, with Mercury nearby. Similar views will be seen elsewhere at the equivalent local time (click to embiggen).

Mars rises higher in the morning twilight. It forms a  a line with the bright stars Betelgeuse and Rigel.

Mars and Jupiter start the week not far from each other  and  draw apart during the week as Jupiter overtakes Mars.

Jupiter is now well above the north-eastern horizon, just above Mars.  During the week Jupiter rises higher and moves away from Mars.